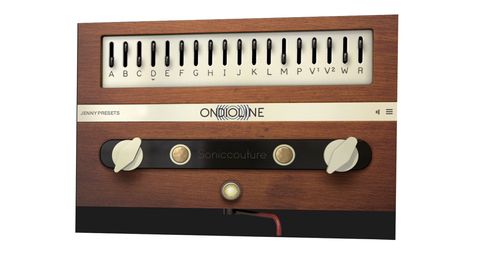 It's great to see this underappreciated, sonically unique, highly playable classic brought to life in software.

Weighing in at 3.4GB (6GB uncompressed), this 1940s valve-powered French monosynth comes with all the preset switch combinations laid out in George Jenny's original manual and is blessed with the addition of a polyphonic mode.

The GUI has no control legending, but contextual descriptions of whatever's under the mouse pointer appear in the Kontakt Info panel.

Nonetheless, it's all a bit confusing until you get used to the functions of the all-important lettered switches at the top. These include switching between waveforms, and activating octave dividers (for extra stacked voices one and two octaves below), a bank of seven formant filters, vibrato, 'percussion', a tempo- synced gate and a short Decay envelope.

Beyond that, there are no adjustable oscillator or filter controls - they're either 'on' or 'off' - and he only freely editable parameters are the divider circuit levels, envelope Attack and Release, and global volume. The last is manipulated using the big red lever at the bottom, which was knee-operated in the real thing and is MIDI-assignable here.

In the Speaker and Reverb Setup page, you can choose to output the instrument directly with no cabinet emulation, or through the modelled Ondioline speaker cabinet (with Close,
Mid and Far mic options) or the three cabs from Soniccouture's Ondes Martenot (with five cab/distance combinations).

A convolution reverb is onboard, too, with impulse responses for springs, plates and rooms. The amount of signal sent to the reverb is set using the R slider (the only one that isn't an actual switch), and its only editable parameter is a low-cut filter.

Ondioline is capable of much more than just the Telstar/Runaway whine that everyone will instinctively reach for on first launch. We rather like its pads (polyphony really does make all the difference), and it even fares well in the bassline department.