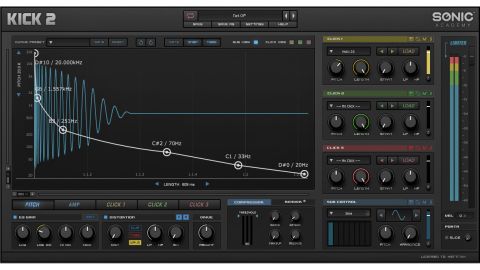 A powerful, flexible multilayered kick drum design system that's easy to use and sounds great, despite its weak internal effects and reliance on samples for the click stage.

There have been a fair few revisions of Sonic Academy's original Kick plugin, but the recently released Kick 2 (VST/AU/AAX) marks the first full-blown sequel, which Sonic Academy says has seen the plugin almost completely rewritten from the ground up.

The original Kick was a simple yet effective affair, essentially letting you combine a sampled 'click' transient with a synthesised 'sub', then tweak the results in a fair amount of detail in order to design and refine characterful kick drums for your electronic productions.

Kick 2 is a far more flexible animal, based on a much cleaner synth engine that exhibits less aliasing distortion - basically, generating a purer sound than that of the previous Kick synth.

Although the included presets will give you a taste of what Kick 2 can do, most of them are geared up for obnoxious big room house productions; it would be absolutely criminal to use Kick 2 as if it were just a preset kick library, though - to make the most it, you have to dive into its editing capabilities.

As with the previous version, Kick's sound- design architecture is split between the main 'sub' generator and sampled 'clicks'. Version 2, however, has three identical click sources, for layering multiple sampled components over the sub.

Each source has its own amp envelope, while the sub generator features a pitch envelope (the magic ingredient for turning a plain old oscillator into a dance music kick drum). Kick 2 has inherited the super flexible Bezier curve envelope editor of its predecessor, with its snap option for locking nodes to musical note values, and tag option to show pitch indicators (expressed in both Hz and musical notes).

For those not yet fully comfortable with designing their own kicks from scratch, a bank of preset curves is included to get you started and teach you the fundamental principles.

For v2, the sub generator has been improved with the addition of an additive synthesis-style editor, offering up to eight partials. Thus, rather than being limited to using a sine wave for the basis of your kick drum tail, you can now pick from a menu of more flavoursome shapes and edit them at the harmonic level.

With three click sample sources now onboard, it's good news that each sound source has independent keytrack on/off switches. And making life even easier, the waveform display also has individual on/off switches for all four sources, enabling as many of their translucent waveforms to be overlaid simultaneously as you need.

This makes it fantastically easy to adjust the amplitude curve of the sub sympathetically to the sampled clicks, helping you to easily craft a smooth transition from sampled attack to synthesised body/tail. The waveform display also boasts incredibly precise vertical and horizontal zooming functions, so you can really zoom in on the nitty gritty details, if required.

Two new distortion types, Tube and Wave, join the original clip distortion algorithm, expanding Kick 2's sonic palette further, although we weren't too impressed by the quality of any of them.

The previous simple one-band EQ has been expanded to a four-band parametric EQ with high- and low- shelves, plus two peaking bands. Although the EQ itself is housed in its own panel (opened with the Edit button), for convenient access, the gain level controls

for each band are also always visible on the main screen.

One of our favourite new features in Kick 2 is the Render tab, where you select a key and velocity value, click Generate, then Export to save a pitched, velocity-adjusted WAV file, all from within the plugin.

A sound designer's dream come true, this makes it very easy to generate a kick then recycle it as a sample in the clicks library. Incidentally, all samples used in your kick drum designs are packaged into saved preset files, making the library and its contents perfectly portable.

While version 1 of Kick was fully responsive to note velocity, Kick 2 lets you set velocity sensitivity from 0% to 100%, making it possible to adjust the dynamic impact of MIDI velocity variation without editing the actual MIDI data. Oddly, there's also a new portamento slide function - apparently this feature has been requested by some far-out trap producers.

Kick 2 is a huge upgrade, with refined sound quality and a greatly extended feature set. There aren't many dedicated kick drum synthesisers that come close to this level of sophistication and tweakability.

The only thing that lets it down are the internal effects, but these are nice-to- have bonuses rather than core features, so it's hard to get upset by the fact that they don't match up to the best dedicated plugins. Ultimately, Kick 2 does exactly what it says on the tin, and then some. If you're making electronic music - particularly EDM - you'll want this in your collection.