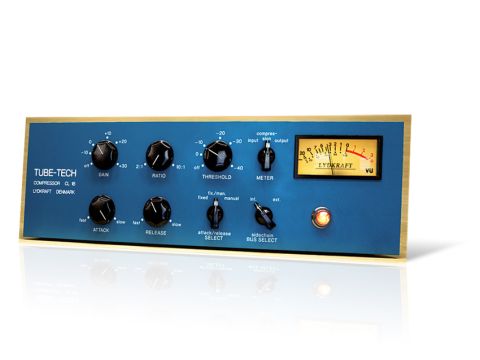 Softube deliver a superb compressor with a genuine analogue sound.

The Tube-Tech CL 1B compressor plug-in has been around for a while, but only for Pro Tools TDM and TC Electronic's PowerCore. Now it's available direct from its creators, Softube, in VST, AU and RTAS native formats.

What makes this emulation especially exciting is that it was designed in conjunction with the team at Tube-Tech (manufacturers of the hardware CL 1B) and is said to meet their exacting standards.

Visually, this plug-in is a dead ringer for the much-loved mono optical compressor/limiter that it mimics. The sidechain bussing switch of the original has been replaced by a simple external sidechain selector. You can run it in both mono and stereo (emulating the linked sidechain mode of two mono hardware units).

Compression controls are pretty simple: attack, release, threshold, and ratio with manual make-up gain. There are also three attack/ release 'presets' - Manual is the standard mode, with attack and release following the knob positions. Fixed mode sets Attack time to 1 millisecond and Release time to 50 milliseconds, and here the knobs become greyed out and inactive. In use, this acts as a great starting point, but because the labelling is so utterly vague, it's also the only way to get specific Attack/ Release settings.

The final mode, fix/man, is a combination of the two but with a twist. Here, the Attack time is fixed (1 millisecond) and the Release time is variable. The clever bit is that the Attack control then becomes a delay knob for the onset of the release stage. In practice this can result in a two-stage release whereby short peaks experience a quick release and longer peaks following the delayed setting. In essence, it's a sort of auto-release combined with a fixed attack.

Like the original Tube-Tech compressor, labelling is sparse, simply ranging from 'fast' to 'slow', but in real terms, attack times range from 0.5 to 300ms and release goes from 0.05 to 10s. All controls are continuously variable.

Optical compressors are prized for their 'musical' behaviour, making it easier to dial in a good sound. But the CL 1B is also a tube and transformer design, adding a further layer of sonic interest. Our first impression was very encouraging, with subtle changes occurring when inserting the CL 1B with no compression. Users of the hardware version will also recognise the VU meter ballistics, which Softube have recreated very well.

A quick spin through various settings shows that the CL 1B is adept at both subtle and audible compression, and that it has pleasing attack and release characteristics. We tried the CL 1B on a number of sounds, including acoustic guitar, drums, piano, vocals and bass, and all benefited in one way or another.

The 'fixed' preset was particularly good for quickly dialling in usable compression, and we very much liked the results on piano, which is one sound source that can be tough to compress convincingly. The attack and release options on the CL 1B are deceptively flexible, with enough variability to create 'snap'-style compression (ideal for snares) and pumping over-compression (great on overheads) without nasty, distorted artifacts. Similarly, we had success squashing transients on picked electric guitar and bass.

Although probably not our first choice for mix bus compression, the fix/man mode can provide 'glue' in small doses, although its fixed fast attack won't appeal to everyone. Notably, the CL 1B is very easy on the CPU, too.

Overall, the CL 1B really is a fantastic compressor plug-in that's capable of both subtle containment and excellent audible colour. It doesn't come cheap, but when you consider that it weighs in at a fraction of the cost of a hardware CL 1B (and a mono one at that!), the price becomes easier to swallow.

Listen to the audio demo to hear:

2. Kit overheads: in fix/man mode, setting up a good compressed sound with fast release then switching between fast and slow attack settings to demonstrate the more and less audible results. Finally, a heavily compressed overhead then bypassed to show effect.

5. Mix glue: first using the fixed mode with 2:1 ratio, reducing the threshold to get subtle compression, then switching to manual mode and increasing the ratio to around 4:1. Reducing threshold until compression is a bit too audible for overall mix.