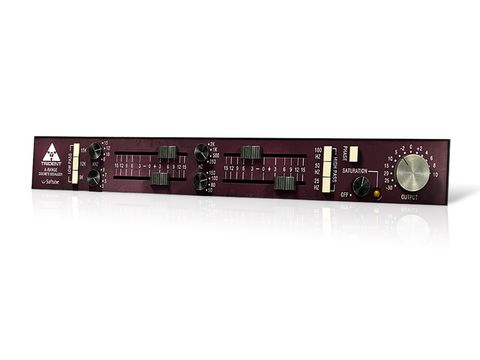 Yet more great virtual analogue hardware from Softube, this is emulation done right.

This new plug-in from Softube is a recreation of the EQ section of a Trident A-Range console channel.

The original desk featured a powerful inductor-based EQ design associated with the 'British' production sound of the time (think David Bowie and Marc Bolan). It also had distinctive fader-style gain controls, four frequency options per band and 'additive' high- and low-pass filters. Naturally, all these features have made it into the Softube version.

The four-band EQ includes high and low shelving bands and two bell-shaped mid bands. There's a selection of four fixed frequencies per band and +/-15dB gain. The frequencies are fairly evenly spaced across all bands, but with emphasis in some key areas, so you get 50, 80 and 100Hz options for the low shelf, and 1, 2 and 3kHz options in the midrange. There's also some overlap between the high shelf (8kHz) and the high midrange band (9kHz).

As mentioned, the high- and low-pass filters are 'additive', meaning that you can engage more than one to get different (and more extreme) behaviour. The other significant thing to note is that the EQ bands interact with each other. For example, even just selecting a different low mid-range frequency will affect the behaviour of the high mid-range band.

Trident's original desk design did not include a saturation control. However, it did overload in a distinctive way when driven hard, and Softube has chosen to mimic this with its saturation feature. We found this very easy to use, as it's a gain-compensated control (so no need to tweak input and output gains as you would on the desk itself).

Its sound varied considerably depending on how hard we pushed it, and at subtle levels proved excellent at adding bite to snare hits and picked electric bass. At higher levels, it really began to compress the overall level and to sap the bottom end in exchange for top-end fizz. However, we found that, for creative effects, combining this with some heavy EQ worked pretty well.

The EQ itself is a powerful design, and pushing it hard achieves great results. We did, at first, find ourselves wondering why we were adding 15dB of 8kHz shelving boost to our bass guitar, but as ever with vintage designs, it's best to ignore the numbers and use your ears.

Up against modern, digital parametric EQs, the obvious limitation here is the fixed frequency design. While this makes the EQ less flexible, we found that combining the low cut filters with an EQ boost still offered plenty of capabilities for shaping, say, a bass drum or the low mids in an acoustic guitar.

Softube has done an excellent job here, and its emulation sounds the part while being easy on the CPU. The EQ itself is great, while the inclusion of a saturation control adds a desirable extra dimension.

In the audio demo, you will hear:

1. Picked bass guitar: working through the EQ bands, boosting the high shelf, settling on 9dB at 8kHz, then using the upper mids to bring out the picking at 3kHz. Next, boosting the low shelf, settling on 100Hz and then scooping some of low mids at 250Hz with the low mid band. Next, increasing the saturation control from off, demonstrating very overloaded, then settling on a more moderate setting. Finally, bypassing to A/B results.

Next the kick - boosting the low shelf settling on 80Hz and using the 500Hz low mid to remove some mid range, trying the low cut filters at 25 and then 50Hz. Winding in the saturation until an overloaded hip-hop style kick is achieved then adding at 3kHz for extra bite. Bypass to compare.