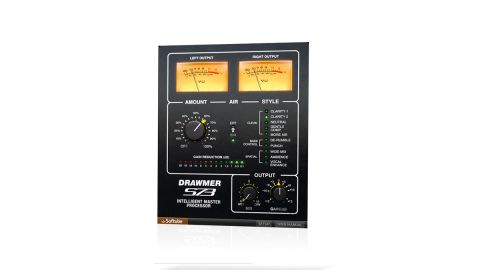 Drawmer S73 makes multiband mastering compression truly effortless, although it's not idiot-proof and can easily be overcooked.

Released in 2015, the original Drawmer 1973 hardware is a multiband mastering compressor enabling detailed control over its three bands and the crossover frequencies dividing them.

Softube's plugin version (VST/AU/ AAX) is condensed to give the flavour of the hardware without the potential minefield for the uninitiated of actually using it.

Essentially, it takes ten multiband presets - called Styles - and gives you a 'more or less' Amount knob with which to adjust the depth of processing applied. Multiband compression made very simple, then.

As well as the Styles and Amount controls, there's an Air switch that introduces the ultra- high frequency shelving boost so beloved of mastering engineers.

You also get an 'LED' Gain Reduction Meter and old-school stereo VU meters for output level, a Mix knob for parallel compression, and a Gain knob to make up the output if necessary. It really couldn't be easier to use: find a style that works and set the Amount to suit. If that's beyond you, there's a series of rather meaningless factory presets to work from!

Automatic 'Finalizer-style' multiband mastering processors can be very dangerous in the wrong hands, and very easy to over-apply.

They make the source material sound louder, brighter and thus 'better' by impression, but can actually all too easily destroy the dynamics, ruining the subtleties of the original musical intention.

Softube calls S73 an 'Intelligent Mastering Processor', suggesting that it somehow analyses the incoming audio and adapts the settings to it. But no, what that actually refers to is the combination of under-the-hood settings defined by the Style selection.

The first thing you might notice when you insert S73 is that even with the Amount at 0, where you would expect no change, there's a level increase that varies depending on the Style selected but can be as much as 4dB (with the Gentle Compression Style). This has to do with the combination of variable initial band gains, and makes assessing the merits of the Styles difficult.

Turning up the Amount not only lowers thresholds and thus increases gain reduction, but also tweaks other behind-the-scenes parameters such as attack and release at the same time to give a musically fluid change.

Pushing the Amount until the gain reduction shows about -3 to -6dB keeps things safe, but any more than that and transient dynamics start to lose impact, even though the compression is so smooth it's definitely usable up to -10dB.

The Air switch is quite unsubtle in its ultra-high frequency provision, and will probably be too much for reasonably balanced mixes.

S73 sounds very smooth and helps to bring clarity and other effective corrections to mixes. And, of course, if you like the clarity added by one Style and the width worked in by another, there's nothing stopping you stacking multiple instances.

On the downside, the varying volume levels make it very difficult to A/B S73 with any certainty that it's not just making things louder - a few memory slots for switching settings with matched output gains would be useful.

Drawmer S73 is a semi-automatic mastering device that takes the pain out of multiband compression for those untrained in the art. It does the job very well, but naturally, you still need a good pair of ears to be sure you're not falling into the trap of over-egging.