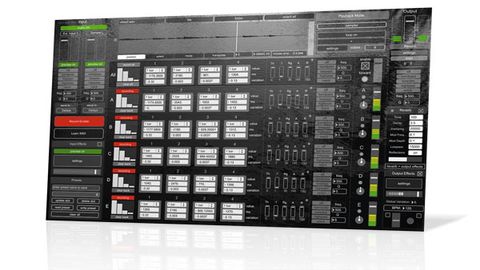 Its less-than-intuitive interface and suboptimal manual limit Feedback 2's appeal, but it'll still interest those who like weird and wonderful sounds.

We reviewed Siren Audio's original Feedback way back in 2011, as part of the developer's Lorelei Suite, a trio of esoteric sound design applications developed in Max/MSP. The sequel retains the original version's core functionality, while adding a sprinkling of canny improvements.

Feedback 2 is based on an audio playback engine with four modes. You can load your own WAV or AIFF files, and six samples are included to get you started.

The Play (which plays audio back as a loop or one-shot from any point, either forwards or backwards) and granular synthesis-based Grain Modes return from the original Feedback, and are joined by the new Play Free (where start and end points are defined and playback speed can be adjusted, but the sample can't be looped) and Sampler modes. It's also possible to use live input from your audio interface as a sound source.

The signal is run through a multimode resonant filter, after which it can be routed through a multieffects module (three effect slots, each offering a choice of distortion, filter or one of two delay effects) or routed directly to the program's delays.

The delays are Feedback 2's main event: they come in five banks, each hosting four delays, and the volume level, length (in milliseconds) and Variation (playback speed modulation) of each delay can be set independently. Every one can also be synced to the global tempo from 1/12 to four bars.

The output channel features a master filter, a reverb and another multieffects section, so there's plenty of processing, and practically everything can be controlled via MIDI.

As you might imagine, there's all kinds of mayhem to be had looping up snatches of audio, fiddling with delay parameters, overdubbing new sounds, twisting everything with effects and so on. This stream of controlled chaos can then be recorded in real time for use in your DAW of choice.

Like the original Feedback, v2 boasts ReWire functionality, but development issues with Max/ MSP mean that it's unreliable, and consequently unadvertised and unsupported. We had limited success with it ourselves, and the developer told us he's unable to get it working at all, so try the demo version before buying if ReWire compatibility is any kind of factor for you.

Feedback 2 doesn't mess with the original version's formula much. Aside from the new playback modes, it concentrates on minor refinements like improving the filter, reverb and granular synthesis playback, and expanding the Random Settings dialog.

These are welcome changes, but unfortunately, the update doesn't improve the application's main issue: accessibility. The interface is convoluted, and the manual doesn't help, stating what each parameter does but giving no explanation as to how it all comes together and works as a whole.

That said, the developer does provide a useful (if soporific) 40-minute instructional YouTube video that gives a better idea than the manual of how to use the instrument.

Perhaps the kind of musician who'd enjoy this type of instrument would see its quirkiness and mystique as plusses, but for the casual sound designer, Feedback 2's eccentricities place it a long way short of essential, which is a real shame considering the wild array of sounds it can produce.