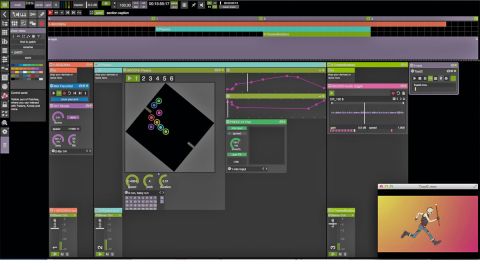 Usine Hollyhock II is a unique, powerful and fun modular host for patching together music and lighting systems/installations.

Not a DAW as such, it's a modular environment for building, sequencing, recording and automating complex musical systems using built-in devices and external plugins. It works under Windows and Mac OS X (though the latter is currently limited to 32-bit with 64-bit in the pipeline) and VST/AU plugins are supported.

Additionally, users can create their own tools using 400 included modules: delays, phasers, samplers, granulators, MIDI sequencers, time and pitch manipulators, etc, not to mention low-level logic and scripting tools. And if that's not enough, there are nearly 100 'Addons' awaiting download from within the program, from basic scripts and patches to complete Workspaces.

A look at the screenshots might give you the impression that Usine Hollyhock II is akin to modular environments like SynthEdit or Reaktor, which it is; however, it's also similar to software studios such as AudioMulch, with its focus on live interaction, and even Reason, with its racks of synths, sequencers, samplers and effects.

A space for work (and play)

A Usine project is called a Workspace and can include any number of Patches and Racks. Racks are where you'll spend most of your time, dragging in plugins, samples, Patches, effects - even videos.

Placing any of these in an empty area of the Workspace creates a new Rack and presents you with a choice of Patches (if more than one are available) appropriate to whatever it is you're dragging in.

For example, dragging in a sample pops up a dialog from which you can choose to deposit it in a Normal Sampler, Grain Sampler, Joggle Sampler, MIDI Sampler or Cross Fade Loop Sampler.

A Patch could be as simple as a sample player or plugin, or a complex system filled with sequencers, MIDI devices or files, audio manglers and layers of sub-patches.

With the audio engine engaged, any MIDI files, step sequences, and sample/audio players in your rack will play back in sync (or out of sync, if you prefer). Thus, you can build complete, complex arrangements inside your Racks, but see On the grid for a more powerful alternative.

There are three kinds of Rack. There's the Audio Rack, of course, and there's also a Video Rack for displaying video, looping its playback and controlling it with typical transport functions. You can mute the soundtrack of the video, but there's not a lot else you can do with the audio in the Video Rack, sadly. Third, you have a Light Rack, used to create automated or interactive Art-Net/DMX lighting rigs.

Routing Patches in a Rack is done automatically: just drag a Patch in and the device at the end of the signal path is automatically routed to the Stereo Out via the outputs at the bottom.

Custom patches are created by patching modules together with virtual cables. This is never going to be child's play, but Sensomusic has made it as easy as can be. Clicking a module's inputs or outputs opens a pop-up box in which all available connections are viewed and chosen.

For example, click a parameter's input and you can choose from a list of control sources such as knobs, faders, LFOs, random data, step data and more. Selecting one causes it to appear in the Patch's interface.

Any knob, slider or control can be automated by activating the Automation Record function, tweaking the control and exiting record mode. The resulting curves are displayed in the Rack and may be edited. Easy.

Finally, you can sequence all of the Racks in a Workspace in the Grid (see On the grid).

Making music with Usine Hollyhock II is a deep and deeply entertaining experience, and there's far more to it than we possibly have space to cover. A lot of real-world live performance experience has been brought to its development and it shows.

Once you learn the ropes (which doesn't take long), the application is friendly and fast but doesn't make any sacrifices in terms of flexibility and power. If you do get into trouble, you can connect to the developer's forum right from the Start page, and there's a Chat panel in the Workspace for communicating with any online member, too.

Although we reviewed the software on Mac - where it performed solidly and reliably, we hasten to add - we should draw Windows users' attention to the touchscreen operation implemented in their version of Usine.

Ultimately, Usine Hollyhock II is a fabulous piece of software, with plenty to keep any experimentally-minded musician inspired for years.