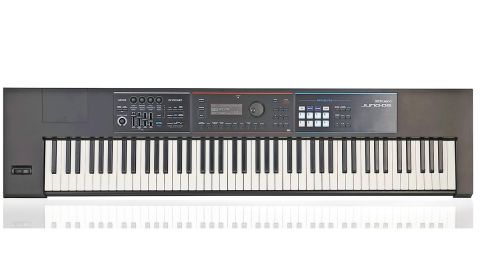 Well-built with a playable weighted action, its sound engine can be deeply edited and covers a lot of territory. Worth a serious look!

The modern Juno range has always been about offering a strong set of features and solid sounds for a reasonable price and the 61 and 88-note DS models are the latest models built with this ethos in mind.

Weighing in at 35lbs, the Juno-DS88 is pretty lightweight as far as weighted boards go (the Nord Stage 2 EX 88 which is currently one of the lighter 88-note boards is 5lbs heavier) so for players who demand a quality weighted action but don't want their backs to break when transporting, the Juno-DS88 is immediately a serious contender!

The 88-note 'Ivory G' keyboard is superb - it's almost perfectly balanced, not too stiff and responds well across its range. We found the standard velocity curve too deep for our lighter playing style/touch, so we opted for the 'light' curve which allowed me to extract more dynamic range from all the sounds onboard.

Build quality-wise, the DS88 is solid. There's the tried and tested mod/bender and four sliders with four control dials that feel sturdy, plus the tough plastic selector switches and backlit rubber pads feel reassuring too.

Though there's plenty of plastic in use on the control panel, it doesn't feel cheap and the MDF chassis adds strength to avoid flexing, plus there's a matte-black metal panel across the front (under the keys) to add further rigidity. With the main control centre residing in the middle of the wide front panel, there's also some handy spare real estate either side for placing an iPad or small laptop.

The surface is smooth throughout but add a couple of velcro strips/rubber grip-mat for securing your device and voila!

The control panel is cleanly designed and generally intuitive with functionality grouped neatly into logical sections.

First up is a Mode section that deals with sample import functionality for user samples (a feature that is very welcome indeed, allowing you to use 16-bit 44.1 WAVs for sound creation/ triggering) followed by a DAW control button that puts the DS88 into MIDI control mode, allowing you to control DAWs (Logic, Cubase, Sonar etc) directly from the DS88's panel.

This is great if you want to use the DS88 as the centrepiece of your DAW- centric studio. Unusually for such a big board, the DS88 can also be powered by eight AA batteries, which is handy for busking in particular.

Section 2 on the front panel contains four knobs and four sliders and in DAW mode these can be mapped to any MIDI CC of your choice (for using with plug-ins etc). In normal operating mode, they take on various roles depending on the function selected.

For example, you can affect filter cutoff and resonance and the amp's attack and release rates, plus mic reverb and chorus/ delay/reverb levels, all with direct control. In addition, the four knobs can be assigned to other functions of your choosing (EQ or FX for example) and you can store 16 sets of controller assignments (like scenes on a Yamaha board). The sliders are also used for controlling levels of the parts in section 3 of the panel and the phrase pads transmit velocity and can be assigned MIDI duties.

Section 3 deals with keyboard options, so you'll find a button for keyboard split (one patch left and one right of a user-definable split point), a Dual switch that stacks two sounds, and 'Super Layer' that allows you to stack a single patch up to five times and then detune each patch for creating bigger sounds.

There's also a nicely spec'd MIDI-syncable arpeggiator with 128 preset styles, (each with 12 motifs) for adding interest to your patch or performance. In terms of sound structure, there are two main modes: Patch and Performance.

Patch mode deals with a single sound made up of four 'tones' (each tone can use any two of the 2,400+ onboard PCM waves) and Performance mode is a 16-part multi-timbral mode for using with the split and dual modes, with external sequencers/DAWs and when using the onboard 8-track pattern sequencer for rhythms/sequences. It's certainly very well-featured and that's before you touch the deeper editing features!

Talking of which, the beauty of the DS88 is that, while it presents itself as a lower-level board, it's actually a very deep machine that borrows ideas/functions from more expensive Roland synth products.

There's plenty in the way of sound-shaping onboard including several familiar filter types (though there's some audible stepping), plus two LFOs and a 'step' LFO per-patch and a really interesting TMT mode that allows cross-modulation of tones in various ways (including velocity- triggering of tones within a patch).

There's also basic FM onboard (FXM) and then, to put the icing on the cake, you have 80 solid-sounding/ versatile effects, plus AutoPitch (which corrects your voice like Auto-Tune) and a very decent vocoder too (though unfortunately there's no combo jack/XLR socket).

All things considered, the Juno-DS88 offers a lot of punch for your pound! It covers a helluva-lot of sonic territory in a pretty intuitive way, with surprisingly solid-sounding results. For just £779 street, it's therefore a bit of a steal!