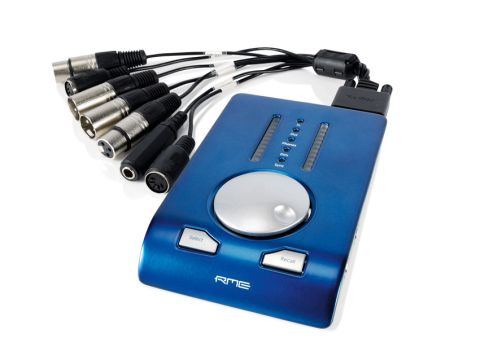 Great design plus excellent sound quality and the DSP system makes this a superb portable solution.

The neat and uncluttered Babyface is the smallest member of RME's Fireface range, sporting just two buttons and one large rotary encoder for the on-unit controls.

Above the encoder are five 'state' LEDs flanked by two LED bar meters, and from this a good deal of the basic metering, gain setting and monitoring selection information can be seen.

On the right side of the Babyface are two TRS sockets for headphones and line/instrument input. The rear of the unit houses the D-Sub connector for the breakout cable, the two ADAT I/O, the USB socket and an input for external power (12v) if the user prefers to not use the USB bus power.

RME has pioneered the packing of substantial amounts of quality AD/DA I/O into small devices, but the Babyface is their most compact to date. The USB cable comes with a dual connector so that if one USB bus cannot provide the 300mA of current needed a second bus can be used for extra power.

Stereo unbalanced line input or a single instrument DI can be accessed through the side mounted TRS socket and monitoring can be carried out via headphones. The rear mounted D-Sub breakout cable provides the remaining I/O (except for ADAT) with two pairs of XLR connectors for balanced line outputs and inputs (mic and line), two MIDI DIN sockets, and a second headphone TRS socket.

The breakout cable is a hefty cluster that needs supporting and to this end a 1.3m extension is provided to make sure it doesn't get strained.

The TotalMix FX software that manages the Babyface I/O is the same as with the Fireface UFX and allows any combination of input, software playback and output routings.

The DSP also allows for EQs (3-band parametric and a variable low cut) on every input and output. This can be switched in/out of the record path without affecting the monitoring.

There is also a reverb and delay FX engine that can be sent to from any input/playback channels and returned on any combination of outputs. Though these effects can be surpassed by most DAW plug-ins they do provide a great source of CPU independent monitoring enhancement for tracking.

The metered DSP has enough power for EQs on all but one of the inputs and outputs as well as running the reverb and delay at 44.1/48kHz.

The performance of the Babyface is impressive at low latencies (down to 1ms) with relatively high track/plug-in counts going on the mix. Using the same driver and TotalMix FX as the Fireface UFX I found the CPU load on our computer identical, as was the lack of any crashes or glitches.

The sound quality is also impressive with the headphone and line outputs sounding clear and full with oodles of power and headroom available. The mic preamps and the instrument DI input are particularly good considering the size of the unit and are capable of capturing any source with an unfettered transparency.

The mic preamps only have 60dB of gain so old school ribbons are off the menu (we tried!) but that's about it, and even flat-out the self-noise level is practically inaudible.

The Babyface deftly combines real sound quality with a flexible functionality that is quick to setup and adjust. We highly recommend this dinky but powerful unit for anyone requiring a high-quality portable recording solution.

There are many slightly cheaper options but the difference in quality of performance, function and sound far outweighs any fiscal gap.