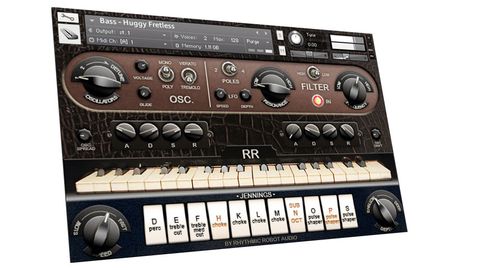 In a market full of generic sounding soft synths, Jennings recreates a unique flavour from a bygone age.

Rhythmic Robot specialise in building software versions of hardware so vintage you can smell the dust in the code. Their latest addition, Jennings, is a recreation of one of the very first synthesisers, the obscure Jennings Univox.

This tiny valve-based unit was designed by Derek Underdown and Tom Jennings who later created the Vox amplifiers. Rhythmic Robot tells us the Univox was used by The Beatles during their early Cavern days in Liverpool and they're '90 per cent certain' it was used on Telstar by The Tornados too.

Available for download from Rhythmic Robot's website, Jennings has a convincingly vintage-looking control panel. There's no installation as such - just decompress the .zip file and load the .nki files into Kontakt in the usual manner. First impressions are striking; forget transistor oscillators, this is the sound of raw valves only.

Rhythmic Robot have meticulously sampled every note and permutation of the wave toggle switches on their original Univox for a wide variety of tones. The oscillator knob sweeps between one or two oscillators with increasing amounts of detune between them.

Each wave permutation was sampled twice so, if you layer two oscillators, there are no digital phase cancellations, chorusing or glitches. Play a long sustained note and you can hear the gentle distinctive phasing of two real oscillators beating together.

Library sounds are scant - we counted only 21 doubled up with direct-from-disk versions (for those who need to stream samples). This might be troublesome for those who enjoy scrolling through thousands of presets and gives the impression that Jennings Univox is a one-trick pony, but this is not the case. Rhythmic Robot build their instruments for experimentation and Jennings includes sound design facilities that exceed the limitations of the original instrument in many ways.

There's a multimode filter for additional sculpting and a couple of envelope generators too, one for the amp and the other for the filter. Oscillator spread helps widen sounds when required, which is handy because the built in chorus, phaser, delay, rotary speaker and amp effects are disappointing.

Jennings sounds like nothing else we've encountered. You'll be hard pushed to recreate standard synth sounds with it but that's missing the point. Jennings excels at exceptional string and organ sounds whose closest (yet still distant) relative might be an ARP Solina string synth.

Producers looking for unique valve synthesiser sounds from a long gone era should love it. Its dominating bottom end and piercing midrange may leap out in a mix, but that might be exactly what you're looking for.