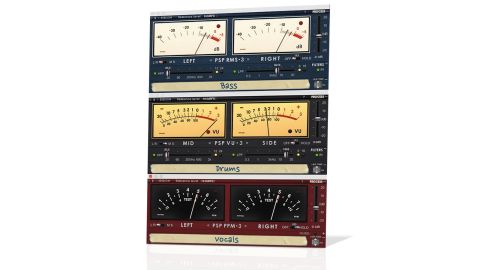 The new features absolutely justify the price increase from 2Meters, making it less a 'passive' device than before and thus a significantly more useful one.

The sequel to PSP's analogue metering plugin duo, 2Meters, TripleMeter improves on its predecessor in several areas, the most obvious of which is the addition of an RMS meter.

The new meter joins the established PPM and VU and all three modules have been rolled into a single plugin, with next/previous buttons for instantly stepping between them.

As well as that, clearly rattled by our only criticism of 2Meters - that it didn't boast a gain control - PSP has not only added a slider for that very function, but also high- (20Hz-2kHz, 12/24dB/octave) and low-pass (300Hz-30kHz, 6/18dB/octave) filters, editable scribble strips, and a choice of global, project-wide or per-instance calibration.