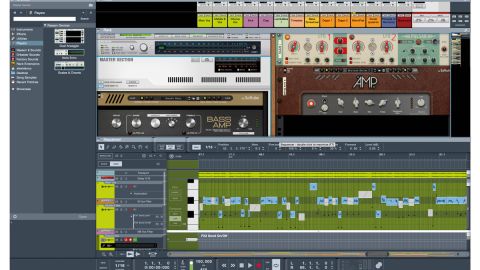 Finally, a big step forward and a true return to form for this enduringly popular and must-try virtual studio.

In 2014, after 15 years of consistently exciting updates, the eighth incarnation of Reason had big shoes to fill... and it came up short.

We blamed Rack Extensions, which seemed to have shifted the onus of innovation onto third-party developers, meaning less of Propellerhead's new-spin-on-a-classic-idea genius. But now Sweden's brightest bod is back.

Aside from the odd new tab for new features, things look nearly identical. Reason 9's most significant new features are found in the Browser, behind the unassuming label 'Players'. An entirely new category of Rack Device, Players are MIDI- generating/manipulating devices, to be used in conjunction with sound-generating instruments.

There are three Players: Scales & Chords, Dual Arpeggio and Note Echo. Note Echo is a kind of delay, generating MIDI notes rather than audio repeats. Defining tuning and velocity of repeats allows delays to play tunes or even build up into definable chords over successive repeats.

Note Echo is versatile and creative, and could be moreso if velocities and pitches could be set per echo, rather than over the entire run of repeats.

Dual Arpeggio is an advanced arpeggiator for monophonic or polyphonic sequences, either in the same key-range or individually defined. It's like having two RPG-8's in a Combinator, but with much greater integration. You can run two different parallel arpeggios, two completely different arpeggios at different key ranges, or one at a time.

We could fill this entire review on the three excellent Player devices and their interactions when combined, but the game-changing Player for many will be Scales & Chords...

A Player of two halves, Scales & Chords' left side lets you set a scale (choose from a list of scales or create a custom one), allowing you to either filter out notes that don't belong in that scale, or conform dud notes to the scale you've chosen. On the right side, the Chords section turns your input notes into multiple output notes in the key you've chosen.

There's a huge range of expressive options: you can define how many notes each chord has, add specific notes (octave up, octave down or an extra 'colour'), and invert the resulting chord. Open Chords pushes some notes away from the root in octave steps for sonically richer results.

Alter momentarily pushes some notes out of the current scale, allowing for really extemporised play. And, of course, these various controls can be mapped to MIDI controllers so that as one hand plays single-note chords, the other can constantly adjust other options.

Like all the Players, the resultant MIDI output can be recorded or directly imprinted onto the instrument's sequencer track.

All this means that Reason 9's Scales & Chords Player is one of the most easy-to-use and expressive chord generators we've ever encountered.

Reason's new Audio to MIDI function is another nod to musical novices with big ideas. You hum or sing in monophonic melodies which are then converted into MIDI notes (non-vocal material generates all C3 notes, allowing easy conversion of rhythms for creating groove templates).

Like Live 9's similar feature, results rely on the accuracy of your humming - but there's no polyphonic conversion, which has been very popular amongst many Live 9 users for transcribing chords from audio.

The flipside to Audio to MIDI is Bounce In Place, a feature that's most welcome in Reason 9, seeing as it's been a home comfort in other DAWs for years. Yes, Reason is so CPU-efficient that it's not as necessary, and yes, you can take the long way around by exporting and reimporting a loop, but convenience is king.

There are also workflow improvements. For example, three buttons now allow quick assignment of the type of editor applied to individual audio clips.

The new Reverse MIDI notes and MIDI note-chopping are useful too, but less inspired are two new visual themes: Blue and (the uncannily similar) Dark. They're okay, but having to select them from Preferences and restart Reason to enable them seems daft. Similarly, 'Drop to Allihoopa' - allowing audio export directly to an Allihoopa account - is the answer to a question most have not posed.

More useful is Propellerhead's inclusion of over 1000 new patches. Mostly synth patches geared towards contemporary dance/pop, they further underline the company's desire to target young beginners with an eye on stardom. They're all filed together, too: perfect for new users on the lookout for cutting-edge content or existing users wanting to see what's new.

The Line 6 licensing deal has expired, and their old amp devices have been removed (bypassed Softube Amps open instead), so existing users may need Reason 8 running in parallel until they transition... although with Bounce in Place only having been added for v9, this transition could have been less painful.

On the plus side, the excellent Pulsar - a Dual LFO generator - is now included as standard. This was a launch RE, and at the time we described it as "the only essential Propellerhead Rack Extension". Free initially, it soon became a paid add-on for modulating anything modulatable in the Reason rack. With a clear layout, powerful features, nifty MIDI control options and a stack of cool presets, it's a fantastic tool. Reason 9 even includes some new monosynth Pulsar patches.

Where Reason 8 was a letdown, offering little in the way of improved creativity or workflow, Reason 9 is a huge step forward. On top of this, despite being clearly targeted at a new generation of producers, Reason also cements its position as a stunning adjunct to any professional producer's studio setup.