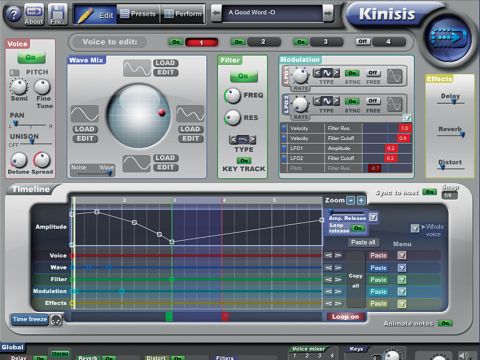 If you've ever tinkered with 3D or Flash animation software, you'll be familiar with the concept of key frames. They're markers on a timeline that are used to define a specific value (or values) for an object at that particular point. It could be its X or Y position, for example, or perhaps its size.

Once you've defined your key frames, the software will calculate a smooth transition between these values, thus creating a seamless impression of movement without the need to 'hand draw' each frame.

It's exactly this system of movement that Kinisis has attempted to bring to synthesis. Each parameter, in what is a fairly regular synth engine, can be given a specific value at any point along a timeline. After a note is triggered, Kinisis starts playback of the sound while updating parameter values according to the key frames along the timeline.

Set a start filter cutoff value to zero, for instance, and a max value a few seconds later, and the filter will open smoothly over the duration of the note. It's a little like creating fastidiously automated synth tracks in your DAW, only Kinisis is far more spontaneous and much more fun.

The GUI can take some getting used to, especially when your first instinct is to play with the various knobs and sliders. Trying this while playing notes reveals that most will refuse to budge. This is because the timeline is active and you first need to create a 'point' on it that relates to a particular parameter panel - that done, you can twiddle away, which will actually define the settings of those parameters for a specific point in time. The parameter panels are colour-coded to match their timeline counterparts.

"The GUI can take some getting used to, especially when your first instinct is to play with the various knobs and sliders."

Despite this initially unintuitive behaviour, the big bonus is that creating moving and evolving sounds is far easier than manually automating such changes in your DAW. This means you can pull off neat tricks, such as adjusting the waveform mix as the sound evolves.

Up to four waveforms can be blended using a circular mixer - it's just like the vector synthesis pioneered by Sequential Circuits in the '80s and further developed by Korg's Wavestation in the '90s. The waveforms are selected from menus that appear on the four compass points of the mixer. There are standard saw, square and sine shapes, as well as a small library of waveforms from other sources.

However, the real power comes from the integrated waveform editor, with which you can add harmonics, adjust their phase and set their amplitudes. This is powerful stuff, and the results of this decidedly digital form of synthesis typically sound harder, edgier and more cutting than classic analogue designs.

Sadly, none of this power has been tied to the timeline, as each waveform remains static after selection - it'd be great if there were ways to influence the waveform's harmonic structure via the timeline.

The oscillators can be pumped through the filter section, but you're limited here to 12dB implementations of low-, band- and high-pass models, which perhaps further accounts for the 'digital' sound of the output. A more extensive selection of filters would be most welcome.

After the filters, there's a modulation matrix for modulating parameters like the oscillator's amplitude, pitch and pan values; a filter's cutoff and resonance; and the waveform mix. Modulation sources include the two LFOs, pitch, velocity, aftertouch and modulation wheel.

As mentioned earlier, subtle colouring in each of these panels corresponds to a coloured track on the timeline. Click a point in the cyan timeline, for example, and any adjustments you make to the similarly-coloured modulation section will be stored at the current breakpoint. This timeline approach is unique, powerful and a lot of fun to play with.

You can select multiple breakpoints to move, copy and paste them, or adjust parameters for all of them. Values can also be copied, cut and pasted between tracks, and any sub-section can be looped.

The Amplitude track works a little differently from the others in that it's presented as a traditional multipoint envelope - you can thus create a standard ADSR shape with it. There's a 'release' switch that fades the output after the timeline has finished playing, but it's frustrating that there aren't one or two normal (and host tempo independent) ADSR envelope generators so that you can use modulations (of the amp, filter, etc) that aren't bound to the timeline.

You can sync playback to the host, locking the timeline's duration, and value changes from the timeline can be either relative or absolute. Another neat feature is the Time Freeze button. This enables you to drag a cursor backwards and forward across the timeline and hear the resulting effect, and you can even assign this to a MIDI controller!

Kinisis is bundled with a considerable array of patches, and the synth engine is more than capable of emulating all the staple sounds you'd expect from a modern workstation. There are short stabbing basses, semi-realistic acoustic instruments, '80s-style polyphonics and soft, delicate lead sounds.

But it's only when you modulate the sounds with the timeline that you begin to hear the difference between Kinisis and many other sound generators, and that generally only happens when a sound lasts longer than a second. The bbabasy_BB patch, for instance, breaks from the standard envelope to produce a glitchy repeat three seconds into playback, while Bass_Strings_Morph uses a clever combination of automated vector synthesis and a loop to produce what sounds like an authentic brass/string combination.

"It's only when you modulate the sounds with the timeline that you begin to hear the difference between Kinisis and many other sound generators."

The pads are fantastic. The warbling AsTimeGoesBy5 is a great example and would be virtually impossible to create with any other synth. And as you might expect, some of the rhythm patches make best use of the timeline, delivering pulsing, bleeping sounds that would add energy to most tracks. The patches SheVanishedToo and 140bpm -O illustrate this beautifully, especially combined in a multitimbral configuration.

Our inner obsessive would like to see smooth spline curves as well as straight lines, and perhaps the ability to set different loop lengths for each track, but there's more than enough here to keep you twiddling for months.

Although the synth engine itself is nothing spectacular, Kinisis' clever modulation system means it's capable of many wonderful and unique sounds, and we can't think of another synth that offers such a powerful method of making dramatic parameter changes over time.

Listen to what Kinisis can do: