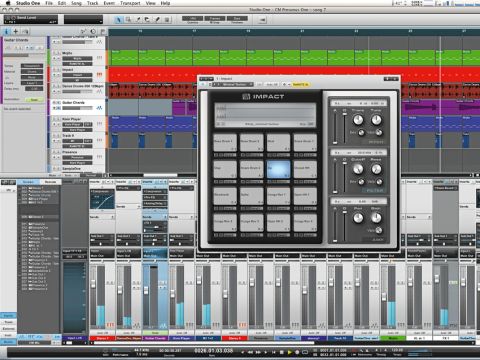 Not as comprehensive a package as the big names, but Studio One certainly matches up in quality and usability terms.

The recent arrival of Propellerhead's Record has shown that there's still room for new DAWs. However, Record neatly sidestepped a head-on collision with the big hitters by being slightly leftfield.

By contrast, PreSonus' first foray into music software, Studio One, squares up directly with the Logics and Cubases of this world. Is PreSonus mad? Let's find out.

Studio One is said to include all you need for music production, from multitrack recording to effects processing, sound generation, and, in the Pro version we're reviewing here, mastering.

The cheaper Artist version (also bundled with all PreSonus FireStudio interfaces) has a reduced feature set, with other differences being fewer plug-ins and no third-party plug-in support.

"Studio One squares up directly with the Logics and Cubases of this world."

Mastering is performed in Projects, and these serve as a place to sequence mixdowns, as well as produce Red Book CDs, MP3 CDs and disc images. Finished mixes can easily be shifted between Songs and Projects, too.

To get you up and running with a minimum of fuss, Studio One includes a start window, in which you choose and create projects and songs, select audio interfaces and access tutorials. Here, users of PreSonus' FireStudio range of audio interfaces can benefit from some interface-specific song templates, and there's also the Cue Mix system.

This makes it easy to set up monitor mixes for artists to hear while recording. You allocate the physical outputs you want to use in the audio I/O settings, then each console strip shows an additional send level and pan for the monitor mix.

Clicking the padlock icon transfers the current channel level and pan to the send controls - in fact, this is the default mode, so activating Cue Mix immediately gives you a monitor mix balance matching your output mix.

So far, so good. However, the real beneficiaries of this system are those using PreSonus FireStudio audio interfaces, as their Cue Mix fader will also include a zero-latency button. With this engaged, monitored inputs are routed directly to the respective Cue Mix output using the audio interface's integrated mixer - ie, they don't pass through the Studio One software. Thus you get an adjustable zero-latency input signal combined with your other cue signals.

The only thing to note is that tracks using this mode will not include any insert effects you have on the channel. Even so, there's nothing to stop you using an effect send to add a dash of reverb, as this will only incur a delay on the reverb itself (like a pre-delay) and so shouldn't be too distracting.

Rounding things off, Studio One has around 10GB of sound content, including loops and samples, plus a special sound set for NI's Kore Player. PreSonus has also bundled in Toontrack's EZdrummer Lite and NI Guitar Rig 3 LE.

Once you've set up a Song, you're presented with an arrange page for recording and sequencing audio and MIDI, with a number of optional side panels. To the left, there's a track Inspector; to the right, a Browser for files, sounds, instruments and effects (you drag each from the browser into your project), and at the bottom, there's a mix console. This bottom panel can also house an audio or MIDI editor.

No doubt you've already spotted the striking similarity to Logic Pro, Ableton Live and Pro Tools - if you've used any big-name DAWs before, you'll be right at home with Studio One.

We found recording audio incredibly easy, and the setup of new audio tracks and routing of signals is much like other apps. For multiple takes, you can either use cycle recording (à la Cubase or Logic), or a MIDI and audio track 'layer' system not too unlike Pro Tools playlists.

"We found recording audio incredibly easy, and the setup of new audio tracks and routing of signals is much like other apps."

Beyond this, most editing functions, such as cutting, copying and fades, can be performed in the main arrange screen, using the six mouse tools (Arrow, Range, Split, Eraser, Paint and Mute). There are no folder tracks, but editing multiple tracks 'as one' (ie, multitracked drums) can be done via Edit Groups, which also link some console features, such as fader levels.

Studio One includes timestretching, and it can automatically stretch any tempo-tagged audio loops that you import. Going beyond this, individual tracks can be set to follow tempo changes and be repitched in real time using one of three modes: Drums, Solo and Sound. In use, we preferred the manual method of holding Alt/Option and dragging the region edge.

As mentioned, there are 26 effects plug-ins, including dynamics, EQ and metering. In use, we were most impressed by the Ampire amp modeller, the Pro EQ and the Room Reverb. All included effects feature a MicroView in the mixer, for direct access to the most important parameters and perhaps a relevant meter - it's a bit fiddly, but still handy. There's also the PipeLine plug-in for plumbing in external hardware.

Studio One has four PreSonus instruments included: Impact drum machine, Mojito synth, Presence ROMpler and SampleOne sampler. Having worked through their libraries, Presence's is the most immediately gratifying, with 346 sounds ranging from strings and pads to basses, effects and keyboards.

A nifty system called Control Link enables the quick binding of physical controls to parameters on effects, instruments or in Studio One itself (eg, mixer faders). Once you've made a map of your MIDI controller, you just twiddle a physical control, then a software one, and press the Link button. Mappings can change to reflect the currently active plug-in, too.

Overall, Studio One is extremely easy to get to grips with and, for a brand new program, it feels very accomplished. Rather than reinvent the wheel, PreSonus has nabbed the best bits from the leading music apps and built a system that has none of the baggage that sometimes undermines the established players. We also found it to be totally stable - it didn't crash once.

However, we do feel that the instruments are a little underpowered. What's more, Studio One can't yet compete with the depth of MIDI processing that Logic offers, or the offline audio processing of Pro Tools, for instance. And although there are some great effects, there's no real-time pitch correction and no freeze function.

Still, Studio One is an entirely viable alternative if you don't need every last bell and whistle of its competitors. And let's face it: many of us don't.

Our demo song was made entirely in Studio One and contains, in order: