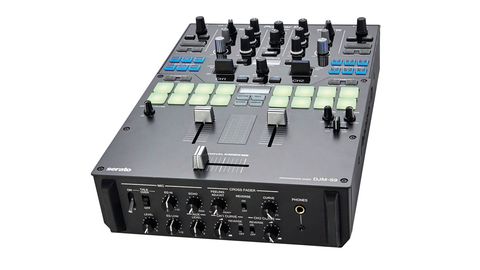 With an amazing build and killer features, now the best high-end, two-channel battle mixer out there.

Turntablists rejoice! While the controller revolution sucks up converts and column inches, you'll be stoked to note that there's still heavy amounts of R&D being pumped into the next generation of battle mixers for you to get your itchy trigger fingers on.

The newest kid on the block is Pioneer's DJM-S9 for Serato DJ. This two-channel scratch mixer has been pawed over in YouTube promo clips by a who's who of Turntablism's biggest hitters for a hot minute, and the whole scene is abuzz with news of this machine's killer features.

Top of that list has to be the mixer's multicoloured performance pads. There are eight Fisher-Price-bright buttons a side, which brings the DJM-S9 up to speed with the number of Hot Cues available in Serato DJ.

As you'd expect, they're MIDI-mappable, like the rest of the mixer, but the ability to assign colour to them adds another sweet touch; it's like scratch DJs of old putting different stickers on their battle records so they'd know where the best cuts are.

The eight pads per channel have four modes - besides the Hot Cue function you get Roll, Slicer and access to the Sampler. However you use them, your eyes are drawn to them like a moth to a flame, and you immediately just want to have a bash.

But funky pads alone aren't enough to make this the must-have high-end scratch mixer on the market - let's talk crossfaders. It's the first real, deal-breaking, port of call for DJs checking out any new mixer, right?

Thankfully Pioneer's in-house Magvel Faders have been updated to Pro status, and delight with their contactless, magnetic glide. But, doper than that is the 'Feeling Adjust' knob on the (if we're niggling, slightly crowded) front panel.

Getting the cut 'just the way you like it' in the blink of an eye is something that will appeal to the vast amount of DJs out there who are as personal about their crossfaders as they are about their music choices.

Yes, InnoFADER had that going for years, but who wants to be busting out the Christmas cracker screwdriver set every time they want to adjust the tension on their crossfader?

Phrases like 'ease of use on the go' must have featured highly in the 'wants lists' Pioneer received before building the DJM-S9. Case in point - the wonderfully idiot-proof '4 Beat Loop' button. Besides the drunk-friendly RGB performance pads, this is another feature that's going to get some serious play in the clubs.

One quick tap catches four bars of your beat and loops it. It's not groundbreaking in the DVS game, but its 'one stop' simplicity is really going to appeal to DJs wanting to grab a loop on the fly without dropping down menus and scrolling through options, especially after (ahem) a few beers.

Rounding off the feature-heavy DJM-S9 are some dynamic filter knobs and EQs, and some amazing-as- standard internal Pioneer beat effects, which now can be triggered by some beefy, and wildly playable, toggle switches above each channel. All-in-all it's a cracking build, and the audio circuitry inherited from the DJM- 2000NXS just sweetens the deal.

After spending a week putting the DJM-S9 through its paces we'd have to say that this is the best high-end and most customisable Serato scratch mixer on the market. The only competition comes from Rane's 62, but with its higher price tag and slight lack of freshness, it has to take a close second.

The DJM-S9 isn't for everyone - if you don't need two soundcards, infinitely micro-adjustable faders, a vast array of FX, or a ticket price that rivals a family car, go for a stupendously more wallet-friendly mixer like the DJ Tech DIF-1M.

But, if you're a DVS scratch DJ with the money to drop on a DJM-S9, you won't regret it. It's simply the best plug-in and play Serato mixer available in the world right now, and playing it leaves a lasting grin on your mug.