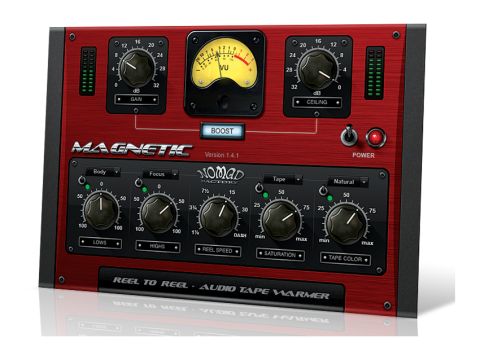 It's not the last word in tape emulation, but as a tasty analogue thickening agent, Magnetic really shines.

Universal Audio's Studer A800 plug-in has upped the stakes for tape recorder modelling, reopening the whole 'wonders of tape' debate. Magnetic would appear to be more of the same, but it avoids the machine-specific route, instead offering a collection of colourful, tape-related processing.

Look closer and the saturation options stretch to tube as well as tape. The five main controls are Tape Color (effectively tape compression), Saturation (tube or tape), Reel Speed, and a couple of EQ controls: Highs and Lows.

All controls apart from the tape speed can be set to one of three styles. Here, the EQ's labelling is vague (eg, Body, Warm and Lush are your options for the low end). The other options are more obvious, with Tape Color switchable between Natural, Vintage and Modern.

As mentioned, saturation can be of the tape or tube varieties, and there's also a tape/tube combination setting. Nomad Factory tell us that the tube circuit is modelled on a Philips ECC83, while the tape aspects are modelled on a variety of undisclosed devices.

Completing things is an output limiter with Gain and Ceiling level controls, activated by the Boost button below the main meter.

Magnetic's non-specific labelling meant we had to spend some time learning how its elements sound. First up, the EQs are all gentle shelf designs positioned at different frequencies. The boost and cut isn't excessive, but there's plenty here to add weight to a sound.

We particularly like the brilliance setting for adding slap to kick drums, and the detail setting for adding mid-range edge to pretty much anything that needs it. These are very much 'sweetening' curves, though, rather than surgical ones.

Lower tape speeds deteriorate the sound, as they should, with the two slowest (it goes right down to 1.875IPS) really mashing things up (on a frequency analyser, they look much like broad band-pass filters).

The most useable speeds are 15 IPS and 30 IPS, with the former offering a fatter, mid-range sound and the latter a more polished, hi-fi sound. The DASH setting is also very close to the 30 IPS option.

It's not possible to bypass the effects of the tape speed simulation, and even with the colour and saturation settings zeroed, the sound does change slightly. It's also worth saying that Magnetic lacks dedicated input and output gain, and although you can activate the Boost option to drive the signal, this also engages the limiter circuit, which may not be what you want.

The saturation and colour options cover similar territory, but their sound is different. We were particularly impressed by the way tape colour could create pumping overheads on a drum kit and popping compression on synth bass.

We also warmed to the general thickening and brightening effect of the saturation. The least impressive aspect is the mastering limiter, which feels out of place and unnecessarily hogs the VU meter.

Overall, Magnetic has much to commend it, and while it is less refined - and much less subtle - than UAD's Studer A800, it does sound good and is a reasonably priced, creative plug-in.