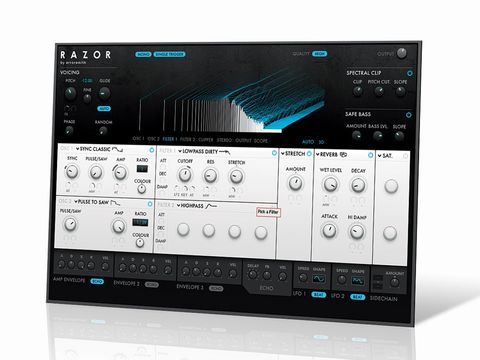 As refreshing as it is phat, Razor makes additive synthesis not just palatable but downright desirable.

The latest addition to the NI synth family, Razor, is a Reaktor ensemble that also runs in the supplied Reaktor Player, with which operation is much like any other VST/AU/RTAS synth.

It's based on additive synthesis, with up to 320 partials (individual sine waves). While additive synthesis has a reputation for being a tad 'scientific', Razor is very friendly, presented in the guise of a typical modern synth, with two oscillators, twin filters, and three effects sections: Dissonance, Stereo and Dynamics.

Under the hood, everything in Razor (bar the dynamics effects) is done by manipulating the frequency, amplitude and phase of its partials. For example, the filters don't process an audio signal; instead, they adjust the partials directly.

So, a low-pass filter reduces the levels of the upper partials. Even oscillator detune is faked by modulating the amplitude of individual partials to mimic detuned oscillators' 'beating'.

The coolest thing about all of this is that it allows for many novel oscillator, filter and effects types that don't exist elsewhere. For example, the 14 oscillator waveforms include the usual sawtooth and pulse varieties, but you'll also find such curiosities as 'primes' and 'sick pitchbend'. Boring these are not, especially as each type has controls specific to it.

Equally twisted are the two filter sections, each with an almost entirely different set of 11 types, with only low-pass and band-pass shared between them. The rest is made up of oddities like 'waterbed', 'unisono noise' and 'gaps'; the latter brutally masks out certain partials, like an extreme phaser.

There are killer vowel and formant filters, and a vocoder option - route a sidechain signal into Razor for some of the gnarliest vocoding you'll ever hear.

Modulation is provided by three envelopes, two syncable LFOs and a 'sidechain' (it basically multiplies two mod sources together). The envelopes have a novel 'echo' function that causes them to repeat. There are MIDI control options too, naturally.

The first effects panel, Dissonance, creates timbres that, coupled with modulation, are spot-on for sci-fi FX, dubstep warbles and futuristic soundscapes. The second offers additive-fuelled takes on chorus, reverb, unison and more, with unique features such as the ability of the reverb to follow the pitch of the currently played note, preventing long tails from muddying the sound.

The Dynamics section offers compression/limiting and saturation/clipping, and can lend considerable crunch. Razor can bring a sense of drama to pretty much anything. Even pad sounds can have a sense of edginess and magnitude that's ideal for complex, atmospheric tones.

Massive, ripping DnB/dubstep noises are shockingly easy to dial in, but bumpin' basses and sweet pads/leads are readily had too.

Quality-wise, it's top-drawer, with reduced quality options to save CPU (it is fairly CPU-intensive, while we're on the sub).

Bass in its place

Two elements of Razor that might be easy to overlook are the Spectral Clip and Safe Bass controls.

Spectral Clip limits the levels of individual partials, while Safe Bass ensures that there's always a certain level of bass content in the signal, regardless of the filter shape in use.

What initially may seem like clinical tools for minor housekeeping tasks actually turn out to be powerful weapons against weak sounds. Safe Bass has the instant effect of bringing all the low end back to a sound that's had much of the bass chopped out of.

Spectral Clip's controls enable you to set an upper threshold and a frequency cutoff point, making it ideal for pulling a wayward signal back into a solid, usable shape, or preventing honkiness caused by over-exuberant frequencies.

We'll admit that we were initially a tad sceptical about Razor, it being 'just' a Reaktor-based affair and entirely additive. Consider us duly humbled.

Now listen to our audio examples to hear Razor in action: