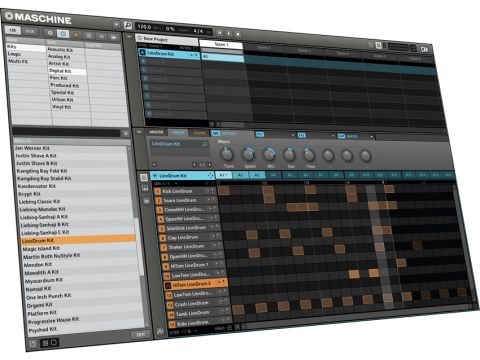 What was once a serious front-runner is now a must-have: Maschine has come of age.

When Maschine launched in 2009, it was something of a game changer for NI, and the software studio market in general. With a product that mimicked Akai's MPC series with the almost endless versatility of a software engine and hardware controller, NI was able to tackle (and tackle successfully) several niches at once and Maschine was welcome with open arms by the pad-pushing public.

Maschine wasn't without its faults, though; from launch, NI's forums have been alive with feature suggestions. The 1.1 update in November 2009 added plenty - direct MIDI sequencing from the hardware to your studio gear, drag-and-drop audio rendering of your patterns and more - but the salivating public never rest and more feature requests have been met v1.5. And once again it's free to all existing Maschine users.

Instead of listing every new feature (and there are a lot) we'll take you straight to the juicy additions.

The first things you'll notice in Maschine 1.5 are the new Sampler tab settings when you load a sound or kit. Instead of the familiar Pitch/Gate page, we're met with a new Voice Settings page, where you can reduce the polyphony of your sample from 32 voices to one, or bring it below zero to introduce a Legato mode.

What's most exciting about this new page though, is the new Engine section. Here, you can replay your sounds via emulations of classic samplers, namely the Akai MPC60 and E-MU SP-1200. These new playback options are fantastic for adding fizz and air to your beats, especially percussion, snares and claps. Have a listen to the examples at the end of the review.

The system really comes into its own as soon as you pitch your sounds up or down, adding satisfying grit.

Unfortunately it's not possible to apply the emulation across a whole Group, only on individual sounds. NI's reasoning behind this is solid, though. Firstly, the artifacts in these vintage samplers come from a re-pitching algorithm and how much a sound is re-pitched during playback, so it wouldn't be true to apply it to a Group as a whole.

Secondly, NI says the engine is quite CPU intensive, so to include an option to 'batch-process' every sound in a Group with the same emulation would eat up your processing. Hopefully, NI can work out a way to apply these engines to every sound without too much CPU sufferance, as they do sound fantastically fizzy.

Speaking of MPCs, it's now possible to import MPC banks directly into Maschine. Any long-term MPC users with unfinished (or finished) projects will be over the moon about this.

Bridging Maschine and your host DAW has clearly been a priority for NI, and a few other new features seal the deal. Quick dragging of audio to your DAW was introduced in v1.1, and it's now possible to do the same with MIDI. Your Maschine patterns can then be used either with other plug-ins or to send MIDI back to Maschine.

The great thing about this is that subtle programming variations can be introduced in your beat using the familiar interface of your DAW and any of its quantisation or MIDI editing functions you might have missed while using Maschine's GUI.

NI has handled DAW automation, another new feature, particularly well, introducing a new feature called Macros. Kind of like Ableton Live's feature of the same name, eight unmanned knobs on the new Macro page can be assigned to any feature deep within Maschine's brain. For example, cutoff of a snare, delay of a clap and pitch of a kick can all be mapped to the same Macro page for quick and easy access to your most-used parameters.

Every Group has its own Macro page with up to eight mappings, so there's a lot of potential here. Though we assume this was implemented with a focus on live performance, it's also really useful in a studio environment if you are accessing a lot of the same parameters that are spread around the plug-in.

You can then map these Macros as automation lanes in your DAW, all of which are handily named for easy reference. It's not possible to map your macros using the hardware so you will have to grab the mouse for this, but it only needs to be done once, as it's now possible to save a default start-up template.

The biggest improvement for us, though, is probably the simplest one. It's now possible to edit the volume and pitch of Groups and Sounds simply by holding the pad or Group button you want to change and adjusting the hardware's master volume and tempo knob for pitch. It always was a little crazy that you couldn't have instant access to a drum's pitch and volume while playing (ie, like a drum machine). Now you forget you are essentially using a MIDI controller, and Maschine takes on a whole life of its own underneath your fingers.

This is also helped by the improved destructive sample editing capabilities on the hardware itself, with a number of new functions implemented such as truncate, reverse, copy, paste and fix DC offset. These features, along with zoom and scrolling, are so well incorporated that you don't even need to look at your screen for quick editing of samples - remarkable really, considering the downfall of hardware samplers was heavily attributed to editing difficulties on small screens.

So far so good, then. NI has taken an already impressive and unique product and put ever-more enticing bells on. And we are literally only orbiting the surface of this update: there's also 1GB of new sample content, including the Maschine edit of the new Abbey Road drums pack, and the ability to save your projects with the sample files included for self-contained sharing.

Also, you can now also load kits without loading their demo pattern over your programmed one. This always confused us in earlier versions, so we're glad to see it ditched.

With this update, NI has not only bridged Maschine and the DAW, but the past and the future. There's no doubt in our minds that this type of hard-soft integration is the way ahead for the software studio and, with this update, Maschine has become the landmark product we wanted it to be.

V1.5 is an update we would have happily paid for, and NI would have been within its rights to charge for it. The scope Maschine now covers means that no matter what music you make, we would be incredibly surprised if you didn't fall in love with it.

Listen to the vintage sampler emulations

Drum loop with MPC60 on hats, claps and FX