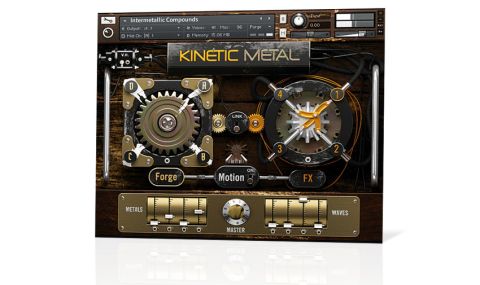 A fascinating, fun and incredibly addictive sonic resource that would make a great addition to any sound designer's Kontakt library.

Sound designer Jeremiah Savage spent a year recording the raw material for NI's latest Kontakt Player library, and a quick tour of the individual elements that make up Kinetic Metal's 200+ instruments reveals that it was time very well spent indeed.

Drawing on an armoury of, er, metallica including a sword, an antique phone, a cauldron, some steel balls, a typewriter, a tailpipe and scissors, amongst many other objects, each instrument combines four 'Metals' with four 'Waves' (sampled synth sounds) to create a wealth of extraordinarily complex timbres.

The stunning, smoothly animated steampunk-style interface enables four preset mixes of the eight channels to be set up and morphed between (albeit in linear A-B-C-D-A fashion), using the Forge Morph Knob. The FX Morph Knob, meanwhile, does the same, but for four preset effects states.

The effects themselves comprise Colour (EQ and filters), Distortion, Movement (a combination of modulation processors and delay) and Space (reverb, delay and rotary speaker), and they bring plenty of mayhem to proceedings.

Both knobs can be automated in the Motion section, following a series of preset LFO wave shapes or a recorded envelope, the rate and depth of which are controlled by the Speed and Strength knobs. They can also be linked for simultaneous operation.

Kinetic Metal's strengths are the sheer amount of sounds it gives you to play with, the unarguable beauty of those sounds, and the abiilty to shift the mix of them around within each instrument. It's a real shame you can't make your own instruments by freely loading up Metals and Waves from the internal library, however, and it must be said that there's also a certain amount of sameyness to many of the instruments (which can be generally be categorised as 'percussive' and 'soundscapes'), as is probably inevitable with such a focused selection of source material.

Nonetheless, this is a fascinating, fun and incredibly addictive sonic resource that would make a great addition to any sound designer's Kontakt library.