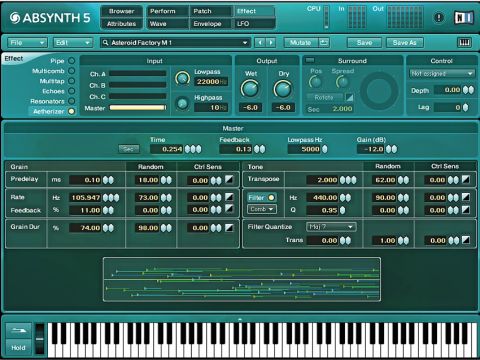 It's still quite awkward to use but yet more impressive sound design features make Absynth 5 a worthwhile update.

Ever since its debut in 2002, Absynth has been lauded as one of the most versatile and powerful soft synths on the market. Native Instruments' semi-modular beast is truly feature-packed, boasting oscillators into which you can draw your own waveforms, definable multipoint envelopes, deep modulation capabilities, and some of the most 'out there' sounds you're ever likely to hear.

The LFOs, vast array of filter types and assignable performance controls are worth a mention, too, while a quick flick through the generous preset library reveals scorching leads, mind-boggling hybrid instruments and evolving pads that almost seem to be alive. A sound designer's dream, then - so what's new in v5?

First up is the Mutator. This offers a new way of quickly creating new sounds by taking an existing preset and morphing it towards the sound characteristics of a group of others. Want that spacey electric piano sound to be darker and more percussive? Just select 'Dark' and 'Percussive' in the browser window, choose the degree of change and hit the big Mutate button - that's the idea, anyway.

Unfortunately, because good Absynth patches are often so involved and considered, with each and every module set up to perfectly complement the others, Mutator isn't massively useful in practice: mutated patches just aren't nearly as perfectly crafted as the originals.

Furthermore, such is the diversity of the preset library that once you've used the browser to select a specific set of aural characteristics, you'll often be left with patches that sound almost nothing like each other. Mutator will then try to morph towards the overall 'feel' of these patches, often giving hugely unpredictable results, and sometimes having none of the attributes that you selected in the first place.

You can, however, mutate just a part of your patch; The Mutator control features a handy little box that enables you to select which modules you want to mutate and which should be left alone. While this can certainly help make mutations less unwieldy once you've isolated the correct modules, again, Absynth patches are often so involved that it might take you a few minutes just to work out which modules are doing what, thus defeating the point of a feature that's supposed to allow you to create new sounds "in seconds".

We think that the patch overview box would be put to far better use as a master module activate/deactivate control, so that you could switch modules in and out on the fly - rather than having to dive into the patch screen - as you navigate Absynth's library of dense and complex sounds.

In fact, it would be worth it for the addition of a master FX disable switch alone, which is still inexplicably missing from the browser screen (and this despite a Mutate button being added to every one of Absynth's eight tabs, nice touch though that may be).

Speaking of the Browser, a simple set of eight rotaries to dial in basic sound qualities such as distortion, resonance, bass and treble now occupies the bottom part of this tab and provides the most instantly usable addition in this area.

The next big new addition is the Aetherizer effect. As existing users will know, one of Absynth's major strengths has always been the vast range of sounds you can coax from any one module, and this new one certainly lives up to that standard.

What is, on the surface, a simple grain slicer with a couple of delay loops, actually turns out to be an incredible sound design tool. Everything from dense, glitchy sound clouds to long, swirling delay lines are possible, and when the randomise controls and Absynth's famous envelopes are brought into play, things start to get really interesting.

In short, it's a top-notch effect that broadens the range of sounds you can get from this already hugely versatile synth, and it's fantastic as an effect plug-in for external (ie, non-Absynth) signals too.

Aetherizer's little brother is the Cloud Filter: basically a stripped down and simplified grain effect that can be selected in any filter module - ideal if you want to create granular effects on only one channel of your patch.

Elsewhere in the new filter department, we have the Supercomb: basically a more extreme, intense version of the Comb filter, which excels at creating metallic, harmonic-rich tones.

Several of Absynth's filters now also feature a feedback loop that enables you to run some of the filtered signal back into the filter's input via a waveshaper, frequency shifter or ring modulator. This can not only create some really frightening distortion sounds but also feedback loops that have a brilliantly volatile, analogue quality to them, further solidifying Absynth's reputation as one of the most organic of sound design instruments.

Disappointingly, Absynth 5 bring no major improvements to the interface, and aside from a few tweaks to bring modulation and filter menus in line with each other, it can still feel fussy, algebraic and over-complicated.

This is most apparent when dealing with the envelopes, as other than using the Envelope and LFO tabs, there's still no way of seeing at a glance which controls are being modulated by what. Even a tiny visual clue that a control is being modulated by an envelope or LFO would go a long way towards being able to decipher a patch without getting a headache - something like Ableton Live's red automation dots, Reason's little green boxes, or indeed, the modulation system used in NI's own Massive synth would be well employed here.

The issue of usability is our only real frustration with this update. While version 5 has certainly brought some great new features (the Aetherizer and filter feedback features alone will be worth the €69 update price for most users), the effort to make the synth more accessible has been misdirected in creating the Mutator tool - it would have been better spent on revising the interface, we'd say.

Overall, then, Absynth 5 is still the mind-blowing synth that it always was, and if you're a serious sound designer, it's a must-have. However, we're left with the feeling that it could have easily been improved even further.

Listen to a mutated flute preset