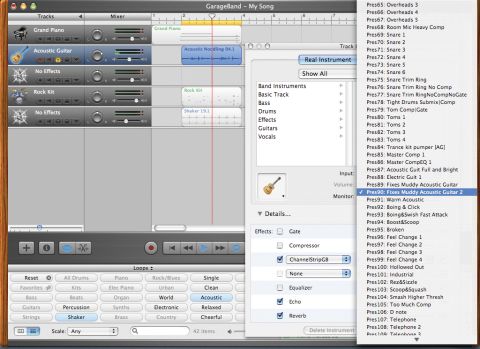 The feature list is perfect, the price is right and the sound quality is absolutely top drawer.

GarageBand made multitrack recording available to the masses. The user-friendly sequencer comes free with a new Mac and there's no need for additional software.

However, despite the ease of use, bundled loops and on-board virtual instruments, a high-calibre set of signal processing tools is what separates the average person's bedroom projects from a pro-level production.

The trouble is, when your sequencer is free, who wants to pay for add-on plug-ins?

Enter Metric Halo, the US company behind some of the sweetest-sounding hardware and software on the planet.

Its ChannelStrip software is a frequent fixture on big-rig Pro Tools TDM set-ups around the world, used by everyone from Diddy to Brian Wilson.

The price? $699. The same software is also available as a native plug-in for use in any AU, VST, RTAS or MAS sequencer on the Mac, such as Logic, Cubase, DP and Pro Tools LE, although this still costs $345.

Obviously, most GarageBand users won't even look twice at something this expensive, no matter how good it sounds.

However, what if it only cost $89? So you get the same software, the same pro-level (and Grammy-award-winning) sound quality, all the presets and all the features: it just costs less.

The catch? It can only be used in GarageBand, hence its full name: ChannelStrip for GarageBand. So we're sold on the price, but what about the sound?

Well, ChannelStrip was designed to emulate the sound of high-end mixing consoles where the key processors are inline on every channel.

In this way, the different tools can interact and shape the sound as it passes through.

Accordingly, all the plug-ins that make-up ChannelStrip - the expander/gate, compressor and six-band EQ - co-exist on the same interface.

There's also an integrated Delay feature, although this isn't delay in terms of ping-pong or echo - it's for adjusting the timing of tracks when using multiple microphones.

This will baffle many GarageBand users, but it's better to have it and not need it than the other way round.

This plug-in cohabitation makes the interface quite large, but graphs can be folded away, which halves the size of the GUI. It also makes good musical sense to have all the processors together.

It's not like the routing is fixed, either, or that all blocks have to be active.

Any processor can be switched off using the Enable buttons (useful for A/B-ing your settings) and the order of the compressor and EQ can be swapped around using the Post EQ button on the compressor.

This can be done in a heartbeat - even on the fly - so deciding whether compression should come before or after EQ is an easy experiment. The gate, however, always comes first in the chain.

Actually, the input gain stage comes before the gate, so you can crank up a weak signal and a phase invert switch follows this, but then it's off to the gate/expander block.

Gates are great for blocking out room noise, guitar amp hiss or any other low-level signal cluttering up your track: simply set the gate to close when the levels reach a certain level.

There's a sidechain function for the gate, the filter of which can be used to make the control of the dynamics frequency sensitive.

One drawback with ChannelStrip's undeniably comprehensive metering is that it's quite subtle.

A lot of information is simultaneously conveyed across the whole plug-in, so it takes a bit of training to know where to look and how to interpret the information.

Essentially, the processor threshold is indicated by a small green arrow; an orange arrow indicates the current detector level; the amount of gain reduction (up to a whopping 60dB) is shown by the pulsing orange bars; digital clipping is highlighted by a red square above 0dB; and on the main outputs, RMS, VU and Peak levels are shown simultaneously.

All three adhere to industry standards for calibration, so you know you can trust them.

The compressor has similar controls to the gate, with the addition of the typical gain and ratio controls, plus a 'type' control for compression, which switches between smooth, warm or fast.

The difference between the three settings is clearly audible, so it's well worth experimenting to see which works best.

The sidechain function is included as well, and is immensely useful as you can direct the compression towards user-defined frequencies.

Finally, the EQ section is a six-band parametric, double-precision model, capable of fairly extreme cut or boost, without any horrific artifacts. Smooth is the word.

Each band can be activated individually and the corresponding graph can be edited using the mouse, with a neat method for adjusting a particular frequency's bandwidth. There's also a large gain fader to tweak the EQ's output level.

Once you become attuned to the look of ChannelStrip, it's easy to get good work done. Over 120 presets are provided, covering everything from miked drums and solo instruments to master buss compression.

Using these off-the-peg settings, you can quickly get an approximation of what you need, then fine-tune the dials for bespoke results.

Besides the core presets, Metric Halo has also created a collection of GarageBand-specific presets, incorporating the bundled software instruments and plug-ins.

This gives the stock sounds another sonic shot in the arm. ChannelStrip is extremely CPU-efficient - unlike GarageBand! It's also already available as a Universal Binary release.

It seems there's almost nothing Metric Halo hasn't thought of, and every GarageBand user should buy - or at least demo - this software.