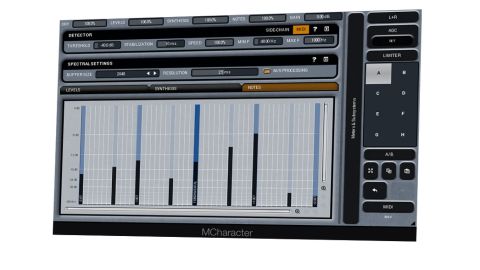 MCharacter successfully combines harmonic shaping and synthesis in a corrective and creative plugin, in a way we've simply never seen before.

It does this using a pitch detector followed by three adjustment modules - Levels, Synthesis and Notes - each of which employs a bar graph-style display for adjustment.

Levels lets you rebalance up to 32 existing harmonics, from the fundamental to the fifth octave. Synthesis and Notes generate additional (level-adjustable) synthesised harmonics, each offering slightly different pitch scaling.

For Synthesis, this is a 32-part harmonic scale (from the fundamental to the fifth octave), much like Levels; while for Notes, it's a musical scale covering two octaves above and below the fundamental. Both synthesised options can be used concurrently.

Three sliders are used to balance module outputs (Levels, Synthesis and Notes), with a fourth slider blending in the Dry signal, and a fifth setting the overall master output Gain.

The Detector section analyses the pitch of the monophonic source signal. Its main adjustable parameters are Threshold (0 to -40dB) and two frequency limits (Min F and Max F), within which it operates. Further options are Stabilisation, providing a fixed delay to allow for inharmonic sounds, and Speed, which governs responsiveness to pitch change.

MCharacter is a frequency domain processor that buffers the incoming audio, and you can adjust the Buffer size and Resolution to balance CPU hit, latency and processing accuracy.

MCharacter is reasonably easy to get to grips with, and the interface is intuitive. Nonetheless, it's worth saying that all three modules are reliant on the accuracy of the Detector and Spectral settings, and in practice, adjusting these requires a certain amount of trial and error - we found that different buffer sizes worked better for different types of sound.

The Speed, Stabilisation and Threshold parameters massively influence the outcome, and we found that turning down the Dry level and monitoring just the synthesised harmonics while tweaking them helped us get the most stable results.

This allowed us to add a reliable sub bass layer to an existing electric bass, and to generate some wonderful artificial-sounding synthesised harmonics from flute and picked guitar.

So, as well as being a corrective plugin, MCharacter doubles as a slightly out-there effects generator, with a handful of presets ably demonstrating this side of it, using modulation to add movement to multiple harmonics.

MCharacter is a plugin of two halves. On 'real' instruments (where any hint of 'synthesis' could be a deal breaker), adjusting existing harmonics can be surprisingly effective with careful setting of the detection parameters.

On the other hand, though, its synthesis engine can generate both subtle and overt harmonic enhancements that aren't possible with regular EQ, and it's this side of the plugin that we like the most.