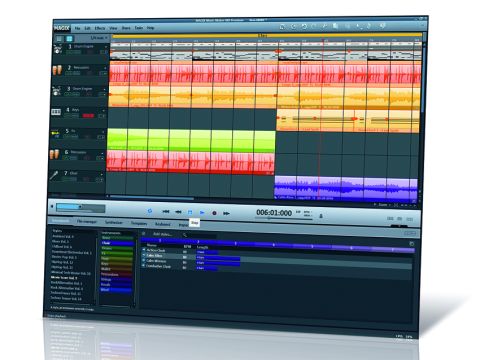 Music Maker's feature list is impressive, but in use it falls flat owing to numerous unresolved quirks and usability issues.

Music software aimed at beginners comes and goes, but Magix's Music Maker series has more staying power than most, with the firstversion dating right back to 1994.

Recent versions have been mediocre, and we awarded 2008's Music Maker 14 a 6/10 score, citing its lack of stability and quirky interface as detracting from an otherwise decent feature-set. So has Magix upped its game since then?

"Music Maker is a maelstrom of features piled on top of each other in such a way that it's arguably harder to understand and get to grips with than some pro software."

Not really; the program is still pretty much the same deal, and the most obvious development is that the interface now looks slightly more like GarageBand.

Sadly the similarities between Music Maker and Apple's lauded entry-level music software end there. GarageBand skillfully weaves simple but powerful music-making tools into an easy-to-use package; Music Maker is a maelstrom of features piled on top of each other in such a way that it's arguably harder to understand and get to grips with than some pro software.

On paper, Music Maker MX Premium is an amazing deal: it supports ASIO, you can use VSTinstruments and effects, and there's a huge sound library and plenty of built-in instruments, including the pre-existing Revolta 2 synth (which we really like) and some all-new ones.

Century Guitars is actually a single guitar sound with a bunch of effect variations. It's OK for simple stuff, but no great shakes, though you can run it through the included Vandal SE guitar amp sim.

Electric Bass is again based around one patch, but this time the effects provide more meaningful variations. Lead Synthesiser is another sample playback instrument, though this time the selection of sounds is more varied.

Drum Engine is a drum sampler with a seemingly broken amplification envelope where the Sustain and Decay sliders don't make any difference to the sound. Finally, Loop Designer appears to be a rehash of the Drum&Bass Machine from previous versions - and there are even parts in the manual where it's accidentally referred to by its former title.

Other features include 5.1 surround mixing, ReWire capability, the ability to publish projects directly to SoundCloud and Facebook (new in this version), pitch and time correction, video effects, CD mastering… the list goes on and on. It's not as if the interface is badly designed either - it's clean and appealing, and includes an Easy mode that hides some of the advanced features.

It doesn't add up

Unfortunately, when all these elements come together, they add up to considerably less than the sum of their parts.

While it's easy on the eye, the interface is fiddly and awkward, with various usability issues; the audio engine is glitchy and unstable; the graphics are also glitchy at times; the manual has numerous errors, omissions and inconsistencies; and, just as inprevious versions, many of the included instruments and effects pop up in their own window that stops you from tweaking anything else while you're using them.

As with MM14, we found it impossible to monitor audio through Music Maker while recording, and we noticed users complaining about this fundamental issue online, too. It's a major problem that Magix needs to resolve.

Used as a basic eJay-style 'loop 'em up', it's not terrible; and the enormous loop and virtual instrument preset library is of good quality, covering many accessible musical styles. Still, considering that so many of the features clearly mark out Music Maker as intended for proper recording/mixing - and the fact that it's actually more expensive than, say, Cubase Elements 6 - that's not exactly a ringing endorsement.

When it comes to ease of use and getting good results with a minimum of fuss, Music Maker is outclassed by practically all other music software packages that we've tried in its price range. Its frustrating quirkiness negates the value of its decent sound library and myriad capabilities, the potential of which will largely gountapped due to the way in which they're presented.

As such, it's extremely hard to recommend Music Maker to any but the most patient computer music novices.