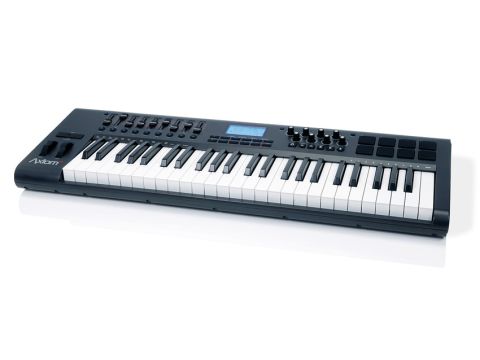 If you're upgrading this is the one to go for. It may be a little pricier but you get what you pay for.

Your controller keyboard is your main connection with your DAW. It's usually the one piece of gear you use most after your mouse so choosing a new one is a decision not to be taken lightly.

Many have tried to elevate their humble USB MIDI 'boards into something more essential but the balance between speed, usability and flexibility has proved pretty elusive.

Our favourite example has been M-Audio's Axiom Pro which used their HyperControl system to map knobs and sliders to their on-screen counterparts with the minimum of thought on the users part. Now many of the breakthroughs of the Pro have filtered down to the new 'basic' Axiom and the result is a keyboard that's impossible not to be impressed by.

There are plenty of cheaper USB units and the majority of those feature some kind of knob and slider action for assigning to parameters in your plug-ins. Likewise if you're a power user and perfectly happy with your combo of USB 'board, Behringer BCF and Novation Nocturn then the Axiom offers far less.

Finally if you're already using a similar system such as Novation's popular SL keyboards then spotting the difference between it and the Axiom will prove sufficiently hard as to make a switch pointless.

However, where the Axiom does become interesting is for those that currently don't have hardware control of DAW parameters and want something that's going work. Quickly. In fact, if you've been languishing with a basic sub-£200 USB keyboard then the features of the Axiom will be nothing short of a revelation.

First there's the ease of set up, the trickiest part of which is negotiating M-Audio's website to double check you're using the latest driver. From there you tell your DAW that you want it to use the Axiom (via menu options that it adds), you connect with USB (which also provides power), start your DAW and Axiom maps all of your mixer controls in a sensible and predictable fashion to the surface sliders and buttons.

Don't want that? Toggle the Instrument button and Axiom's controls instead tweak parameters in the currently highlighted plug-in instead. It works exactly as you would want it to. And it does work.

Sure, remembering that knob eight is cutoff in Logic's ES2 does require some active committing to memory on the users part but once that's locked DirectLink is an amazingly invisible connection to your DAW's heart.

We love the simple toggling of the buttons beneath the sliders (the ninth button flips these between Mute, Solo and Record Arm) and hats-off to the chunky display for at least having a go at naming parameters and track names being tweaked.

DirectLink lacks some of the depth and learning skills of the Pro's HyperControl but if all you need is basic transport, mixer and plug-in tweakery then why pay more? And the option is always there to lock horns with complex third-party plugs and deeper DAW elements via CCs later.

The keyboard action is firm enough to trick you into thinking it's a more expensive rig and the rubbery controls neatly side-step the cheapness you connect with hard plastic. Likewise, the new flat faders: not as nice as the Pro's proud nubbins but impossible to truly gripe about.

We even like the Axiom's curved profile making it easy to tuck under your arm and generally shove around. It therefore comes highly recommended. You don't change keyboards very often but if you're still languishing without hardware control of you're DAW, then it's time you did.