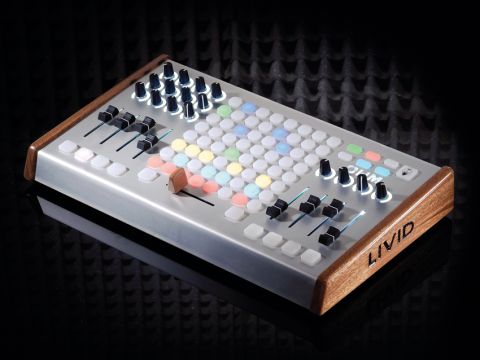 The OhmRGB is a semi-update to Livid Instruments' flagship Ohm64 controller - it's 90% the same as the 64 (which continues in production), but there are differences.

On a cosmetic level, the Ohm64's available in unique custom finishes, but more significantly, the OhmRGB has multi-colour LEDs under all of its buttons, and a new expansion port.

The RGB has an aluminium case, with mahogany end caps, and the same 81 buttons, 16 knobs, and nine faders as the Ohm64 and the same wooden crossfader.

You probably won't be taking this hefty behemoth to the coffee shop; however, when you are playing, the size and solidity make you feel like you're really doing something 'proper'.

Colour coded The RGB can function as a class-compliant MIDI controller, but it's the extras that make it worthwhile, including the OhmModes MIDI Remote Script for Ableton Live, and the OhmRGB Editor - basically the Ohm64 Editor application with extra controls for LED colours.

For Ableton Live users, the OhmModes script is a no-brainer - even if you personalise your setup later, it's a great starting point, seeding ideas about using colours to represent different functions, with three modes - Mixing, Playing and DJing.

The modes are switchable from the RGB itself, and the Mixing mode, for example, uses yellow/blue/red to indicate Live's usual mute/solo/record status. The colours are customisable, though - from the Editor's LED layer, all it takes is a click/drag across a particular pad graphic to cycle through the colours.

From a DAW, MIDI velocity or CC values can be used. There are specified ranges, for instance, velocities 1-3 = white, 4-7 = cyan, and 8-15 = magenta. By using Live's MIDI effects, and using MIDI notes to light specific buttons, a huge amount of organisation - or chaos - can be applied.

The challenge is to figure out what to do with all of this visual information - there's a high risk of spending all your music time making pretty patterns with the lights, instead of making music. Well, we guess the novelty will wear off after the first few months.

All of the lights

It's not all about lights - there's that 'pin header' expansion port at the back too. DIYing and expansion are key to Livid's philosophy, and this connector allows the DIYer to attach up to eight more control devices, like joysticks, faders or motion sensors.

The slot alongside that contains eight dip switches, which can enable/disable each of the inputs. Add that to the MIDI I/O connections, and the two footswitch inputs and, more than ever, the OhmRGB operates as the centre of a complex custom hardware control setup.

For 'routine' Live use, the colours don't make much difference against the APC or an iOS app like Griid. However, more adventurous Live or Max/MSP users will see it differently - the multi-colour LEDs add another layer of visual feedback to the expansive control layout, and we can't wait to see what ends up hanging off that expansion port!