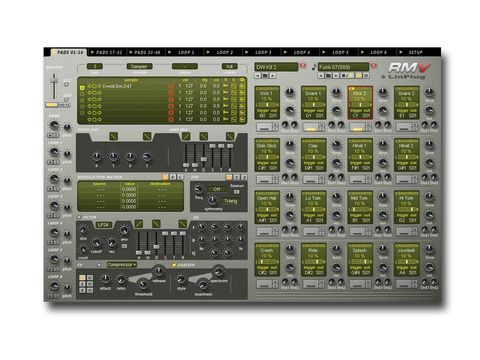 RMV is undeniably powerful, but with a bit more polish, it could yet be the dream drum machine that we hoped for.

The successor to the incredible RMIV, LinPlug's RMV offers more than your average beatbox. It actually functions as a synthesizer, rhythm sampler, loop slicer and MIDI groove library.

Those familiar with RMIV will immediately clock the overhauled user interface, which now offers a more detailed approach to drum editing. The general philosophy seems to be to offer as much control as possible for each individual drum sound.

There are 48 pads in total, arranged in four rows of four, split over three pages, with LinPlug citing the typical layout of MIDI percussion controllers as the reasoning behind this format. Each pad can be used to trigger either a sampler module or one of the 12 types of drum synthesizer.

The perfectly adequate sampler section remains largely unchanged from the previous RM iteration, with layering, velocity-switching and crossfading of up to 30 hits. The synth list, meanwhile, now includes a new universal drum synthesizer.

When LinPlug first announced this, it claimed it would cater for all percussive needs. In reality, while it's suitable for sound effects, it's not so great for actual drum sounds.

Whichever you choose, each source is triggered by a specific, assignable MIDI key for easy programming. Every pad also has its own 12-by-12 modulation matrix; three LFOs; distortion and bit-crushing effects; pitch, amplitude and filter envelopes; not to mention a multimode filter and 4-band EQ.

Oddly, the EQ only goes up to 11kHz, so if you want to tailor the upper reaches of snares, cymbals, or indeed, any percussive element, you can't.

The Varizer section offers three different ways of lending each played note a random element, reminiscent of the sound of a live drummer or 'organic' analogue drum machine. Again, this is on a pad-by-pad basis.

The pads can employ up to three insert effects, which are akin to those found in other LinPlug instruments. These include a compressor, bitcrusher, delay, ping pong delay, flanger, filter, reverb, trance gate and wah-wah.

Furthermore, there are two send knobs per pad, which are assignable to one of three global send effects channels, comprised of one of the aforementioned effects and EQ.

In addition, there are six independent loop modules that enable you to chop the loaded sample into up to 64 slices, each with the same kind of detailed controls that the sampler and synth pads enjoy.

A lot of heavyweight breakbeat producers have moved away from the MIDI sampler and towards audio editing, where there tends to be greater control over each individual loop slice. RMV rewrites the rulebook, handing you extreme control over each slice, but with all the advantages associated with MIDI programming.

The loop section can load REX/REX2 files, but is also able to very quickly detect attack transients to make slices. However, we're not convinced that it's been fully fine-tuned for swift and efficient use.

Certain user interface issues seem to have been overlooked - for instance, it's not that easy to create or destroy slices, and you can't define a loop's start and end points within RMV. If you're into drum loops enough to want to use up to six of the blighters, all with independent controls over each slice, you'd surely expect such basic features to be included!

LinPlug touted RMV's looping/slicing features as being the best on the market, but, ultimately, there are too many hindrances and annoyances for them to be truly useful right now. We do hope that this will be remedied in an update.

LinPlug has introduced extensive librarian features - you can scroll through and even preview several thousand pre-prepared MIDI grooves. Furthermore, you can simultaneously navigate through drum kits constructed by numerous artists and sound designers. We've mixed feelings about these features, however.

On the one hand, it's very easy to get going with RMV using the librarian - in an instant, you can have MIDI drum patterns playing while you audition or tweak kits. However, it feels like a case of quantity over quality, as the sampled content is quite hit-and-miss.

Not only can it take a while to find sounds that you like, but if your intentions don't include use of the supplied library content, some of the library features can be a little off-putting. Perhaps our opinion will change if sample disc providers start to offer content in RMV format.

RMV is a powerful drum sampler and synthesizer and a decent successor to RMIV, but it's currently hindered by a few technical aspects. LinPlug has already issued updates addressing some of the problems we discovered earlier on in our review process, so we hope that they'll keep on refining what is potentially an excellent tool.

If you can live with using workarounds for some of the interface issues and you're willing to get creative with the provided content, RMV could be an invaluable addition to your arsenal.