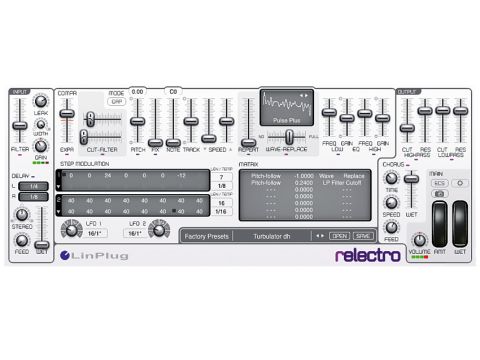 A flawed but intriguing processor that'll no doubt find favour with experimentalists and sound design fiends.

Over the past decade-and-a-bit LinPlug has built a reputation for producing cool and quirky instruments, so we were excited when the company announced its first ever effect.

Relectro is based on an engine designed for a synth, but LinPlug decided that it was much more versatile and fun when implemented as an effect.

Relectro is based on a per-wave processing principle. This means that rather than effecting a constant audio stream (as an analogue-modelling plug would do), it treats each individual complete wave cycle by itself.

If this was the end of the story, it need not always make much audible difference - but LinPlug has designed each of the effects to specifically address this. It has also included some new ones, such as the ability to insert repeated or brand-new waveforms into gaps, and being able to specify that certain waveform ranges are effected while others are untouched, even if it appears only very briefly.

So, what does all of this technology mean for the user? Put simply, it means overt, sharp and relentlessly surgical precision. Relectro's results are in your face and anything but warm or smooth, which makes the effect incredibly distinct and striking.

On a more scientific level, it means zero slopes on effect modules such as compression, filtering and EQ, plus a myriad of pitch effects that normally move smoothly from effected portion of the signal to the non-effected. If just one single cycle does not fall within the range to be effected, then it won't be, which is where that hard-edged, digital quality comes from.

Things kick off with an input section. A low-pass filter is on hand and it's welcome because the effect typically adds lots of high harmonics, and a simple dry/wet control might not be enough to tame them.

The included delay section has a marked impact on the per-wave processing results, while the leak module takes whatever has been excluded at the input and routes it to the output, should you wish. There's even a stereo control available.

Next comes a compressor/expander with an interesting twist: it only has one control. Per-wave processing means that each wave is compressed or expanded, and attack and release parameters are redundant.

This section deliberately chucks out some in-your-face audio artefacts, especially when whacked up to the whopping 60dB maximum.

Taken on its own, the compressor/expander is a very useful processor - it can inject serious dynamics into a sampled drum loop that's already been limited. It works with sampled riffs and heavily delayed samples, too, providing far more powerful, rhythmic level reduction than, say, gating.

Next is a high-, low-, band-pass and band-reject filter system with just two sliders for high and low. If they cross over, anything in the middle isrejected.

The tool is simple, powerful and - thanks to the per-wave processing - has an infinite slope, so is extremely surgical.

Next comes the pitchshifting section. It works by speeding up or slowing down each individual wave, thus keeping the waveforms' start points in their relative positions while shortening or lengthening them.

The effect isn't always beautiful, but it is very precise; and it works very well with the subsequent section, which enables you to fill any resulting gaps with either repeated waveforms or your choice from a wide selection of synthesised ones.

Throw in some intriguing volume and pitch-tracking features and the ability to slide the audio signal across many octaves and you have a very powerful processor that can turn any drum, loop or sound into a vicious lead or bassline. Once again, this can be a highly effective feature when used alone, and it offers some genuinely useful results.

The final process is a simple high- or low-shelving EQ section where Relectro adds some more distinctive flavour.

I got your crazy

The main output section combines the leaked signal, the processed signal and the dry signal. Finishing touches come from an Amount dial for simultaneous grading of key processing values, a chorus effect and a filter section that, along with the other key controls, can be assigned to MIDI controls for performance control.

As well as all that, there are some cool modulation options to excite things further. Relectro offers up a great combination of step modulation and LFOs, assigned via a matrix window. It works very well and confirms that Relectro is best described as a performance-processing instrument.

And this is both its appeal and its drawback. Relectro is fascinating and offers incredible depth, but the sonic results don't quite match itspromise: too often they're just arrestingly mental rather than impressively inspirational.

In its defence, LinPlug does suggest you don't throw the kitchen sink at each signal, because the company knows that things can go from cool to crazy if you apply too many of its modules.

So, while very powerful, Relectro takes a bit of getting used to. It is very much a glitch and electro tool with some occasional applications for other genres, and it doesn't invoke the immediate wow factor with each preset as manyother mangling tools manage, either.

This isn't so much a failing of the presets as a quirk of the plug-in itself, however - to get the most out of its innovative and powerful tools, you really need to tailor the settings to the audio you're feeding through it. Getting Relectro to make the best out of your material requires a little practice and effort.

If all of this sounds like something you could use, though, and you take the time to master the effect, then you will use Relectro for everything from creating basslines out of beats to mangling vocals and adding real-time edits.