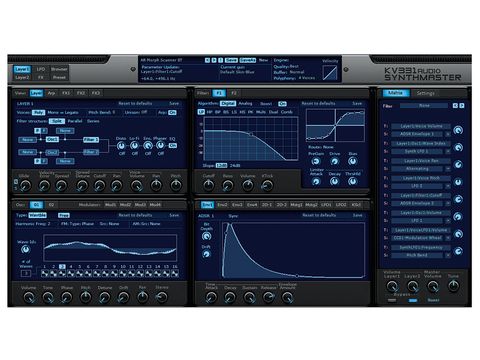 If ever there was a desert island synth, SynthMaster is it, covering all sonic bases with authority and a superb tone.

If there's anything we love more than a geek-arousing synth with a technical spec that'd leave even Steven Hawking speechless, it's one that's also dead easy to use and so special-sounding that he'd probably break into the Hallelujah Chorus.

Enter SynthMaster 2.5, which might be the most comprehensive and complete synth we've ever come across. You might think that says it all, but such a serious statement begs for an explanation.

SynthMaster 2.5 is a semimodular synth that's available in VSTi and AU plug-in formats. The long development period has resulted in a feature list that's exceptionally extensive and broad.

A lot has been added since v2.0, including over 400 new presets (with an online preset browser), aswell as enhanced 'easy' parameters and arpeggiator sections.

KV331 Audio has clearly set out to build 'the synth that can do anything', and so it's not practical for us to go into every detail here. Rather than waste precious space trying to do that, we encourage you to refer instead to the downloadable Synthmaster Quick Start Guide.

With such an exhaustive feature-set, you'd be forgiven for asking whether or not all the bells and whistles that make SynthMaster 2.5 seem incredibly attractive on paper do in fact pay off when it comes to practical application. Well, the interface may not be the prettiest, but it's definitely intuitive and user-friendly, which counts for a lot more in our book.

There's a GUI editor included if you fancy creating a new skin or modifying one of the existing offerings, although we found it a bit baffling on first glance. Our only real complaints regarding the interface are that theinternal effects aren't all in one place and can be a little tedious to configure.

Other than that, everything is nicely laid out and easy to configure. If you're a preset junkie, the online preset library is a must.

The eight 'easy mode' control knobs are conveniently placed on the Browser page and you can always right-click them to view the assign menu.

If you're a seasoned synthesist orakeen experimentalist, then there's plenty toexplore on the Layers page, where almost anything you can think of is possible within a few clicks. There are several ways to modulate the oscillators to produce a variety of unusual and modern results.

The sound is truly outstanding. You can choose from Draft, Good, Better and Best quality settings (which correlate to up to 8x oversampling), and even Draft quality doesn't sound bad at all. The overall quality of the sound is clean and smooth, yet very rich - it's far from sterile.

This is one of the few instruments that we can confidently say is excellent for most categories of synth sound. The additive synthesis module isperfect for organ-type sounds as well as filthy, obnoxious, tearing bass textures, while the new vector synthesis module is ideal for evolving leads or pads.

The unison options are thorough too, now included per-oscillator as well as per-layer, and with stereo spread control thrown in.

We reckon many soft synths have been pretty good at basic synth sounds for some time now. SynthMaster 2.5, on the other hand, excels at expressive, pristine, larger-than-life patches that would take considerable effort to program on lesser-endowed synths.

So, SynthMaster 2.5 will suit those who wants to transcend the obvious saw- or square-based sounds and design truly intriguing patches that haven't been heard before. Plus, when you do want it to do bread-and-butter synth work, SynthMaster 2.5 is more than up to the job - it can even load samples via the new SFZ support.

SynthMaster's filter algorithms have been updated for v2.5, and they do sound rather special. There are two new filter modes: Multi and Dual. The former is continually adjustable, while the latter includes independent Mode and Cutoff knobs.

Just the new filter types alone bring a ludicrous amount of flexibility to the synth, making it possible to create all sorts of sounds from screaming acid tones to tearing dubstep roars and all manner of unusual variations.

There is now also a distortion module that can be placed before, after or 'inside' the filter, and the curve on that is freely editable as well. To give you an idea of SynthMaster 2.5's flexibility, youcan load/save or reset any module individually - so your favourite distortion curves can be saved along with the filter module, for example.

Notably, SynthMaster 2.5's modular design means that it's not necessary to have any of the filters engaged in order to produce good sounds. This indicates that it's not just the colouration from the filtering that gives the synth its great sound!

You can put these filters into motion using the new 64-slot matrix section. It's dead easy to use and you can keep iton the screen while you go through the other pages, too.

The internal effects are good on the whole, but not as refined as dedicated third-party plug-ins, which is fair enough. The vocoder stands out as one ofthe best-sounding internal effects, and it's also easy to get good sounds out of the echo, ensemble and phaser effects.

The new reverb algorithm might sound better than it did, but it's still a tad metallic, so certainly not suitable for all uses. We didn't find much use for the new peak compressor during our review process, but it's interesting that it takes a sidechain input.

Many developers say that they've produced the one and only synth you'll ever need, and we've always felt that was a dubious claim. This is the first time that we agree.

It seems quite reasonable that you could build an entire track using SynthMaster 2.5 alone and not be left wanting at any turn (perhaps bar the effects, which are easily supplanted with third-party ones). We noticed a few minor glitches along the way (eg, colour scheme mismatches on two of the three included skins) but nothing that would deter us from using it heavily from now on.