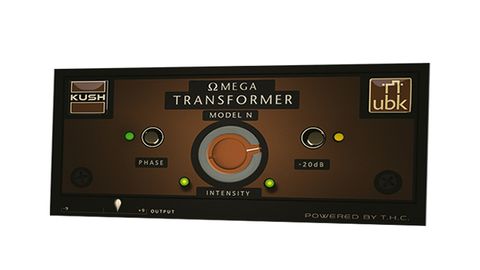 Omega Transformer Models N and A do an amazing job of warming up frosty mixes at a great price.

Model N imparts a tone reminiscent of a classic Neve preamp, while Model A emulates an API pre.

As well as being usable entirely on their own, both Omega Transformers are also designed to be deployed in conjunction with Kush's fully analogue hardware Omega preamp (released for API's 500 series earlier this year), which it describes as "transformable".

The idea is that the hardware preamp captures a very full, clear, neutral sound, which you can then treat with the plugins to achieve - or so Kush claim - the sound of the classic hardware preamps they're modelling, hence "transformable". Brilliantly, however, the plugins are responsible for all the saturation and colouration, and thus are perfectly functional without the hardware, too.

As well as the input/output transformers, both Omega Transformer models also emulate a number of discrete - and unnamed - components under the hood in order to impart that subjectively warm analogue quality. Thankfully, the physics are kept away from the user, and all you need to do to start working with each plugin is push their Intensity knobs.

We tried each one on a variety of individual drum sounds and were quite pleasantly surprised at how they were 'transformed'.

The N model gently squashes fast spikes and wipes away hard edges - if your hats and cymbals suffer from an overly crisp or clinical sound, even fairly gentle use of Omega N will give them a softer but still focused tone.

Model A is a different beast entirely, opening up the midrange slightly and adding sweet air as it drives. Side by side, Model N seems better at controlling overly harsh elements in the mix, while the Model A excites whatever's already there. Both tighten up dynamic range the harder you drive them.

On the negative side, pushing either plugin too hard can result in mushiness that ruins the otherwise dazzling illusion of analogue behaviour.

The plugins are supposed to be gain compensated, but the compensation isn't perfect, which is understandable, since they affect dynamics and apply multiple stages of processing behind their deceptively simple GUIs.

Currently, the automatic gain compensation is enough to prevent the Intensity knob from wildly throwing off your balance, but using your DAW's bypass might not make for a fair A/B comparison, as both models tend to add to, rather than subtract from, the RMS (average) level.

On non-percussion instruments, both models have their own unique qualities. We often got good results combining both plugins, using Model N to smooth and clean up an instrument, followed by Model A to add life and energy.

If you struggle with the inherent sterility of recording and mixing in the digital domain, or if you happen to be heavily into vintage tones, it's hard to think of a reason why you wouldn't snap both of these up as soon as possible.