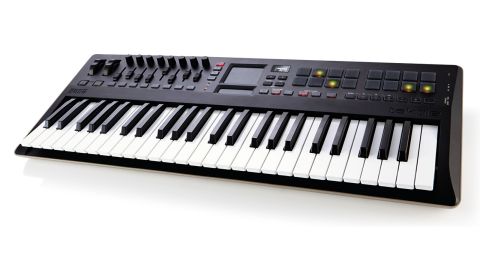 A good range of control options with a set of unexpected tricks to get your creative juices flowing.

Korg's new Taktile range is designed to meet the heavy competition of the keyboard controller market head on and comes in in 49-key (reviewed here) and 25-key versions. A second Taktile range is also imminently due, which offers the same range of controller features but also includes 512 sounds from Korg's Triton range of synthesizers for, as you might expect, an increased cost.

The Taktile 49 features an upper panel in black plastic and offers the same compact form as its competitors (including Akai's MPK range) by shifting its pitch-bend and modulation wheels from the traditional left of keyboard position to the upper left-hand corner above. To the right of these wheels, the amount of control offered is impressive - eight rotary dials, above eight sliders, which in turn rest above eight function keys.

However, control doesn't stop there - Korg have included a Kaossilator- style X-Y pad in the centre of Taktile, which can be assigned either to trigger notes, chords from a particular scale or software parameters, whilst a short ribbon controller is also capable of a wide range of assignable options.

The right-hand side of the control panel is dominated by 16 pads, which serve a wider range of functions beyond the immediate drum input, which will most readily spring to mind. Around the pads are a range of buttons to provide Transport control for your chosen DAW, an Arpeggiator button to enable Taktile's inbuilt note pattern generator and buttons to configure functionality for the pads and touchpad.

Finally, an OLED display between the X-Y pad and the drum pads completes the line-up, keeping you up to date with assignments, editing parameters and plenty more besides.

The keyboard is buss-powered via its USB connector which is, somewhat unusually, placed on the right side panel of the instrument, joined there by traditional MIDI In and Out ports and two assignable pedal controls.

The position of these ports is interesting - on the one hand, you're likely to have cables draped across part of your desk but, on the upside, they mean that you can push Taktile right up against your computer without suffering any lost space at the back of the instrument.

The keyboard surface is highly playable; using the same technology as the playing action from Korg's Krome and King Korg synths, it certainly offers a more responsive surface for Velocity than other controllers we've tried at this price. That said, Taktile doesn't provide aftertouch, which is a slight disappointment.

Clearly, Taktile is stacked with options to allow you to take control of a project within your DAW but Korg have also prepared for integration into your chosen host by providing a guide within the manual, to ensure that set-up within your choice of software is as painless as possible.

We tested Taktile with Logic Pro X, which involved downloading a MIDI driver and the control surface installer too, which took less than a minute in total. Thereafter, once Taktile is selected as your control surface of choice, you're ready to roll.

By default, the sliders take control of Mixer faders, the rotaries control Pan and the function keys provide Solo-enable switches per track, but all of this can be overridden or enhanced, with Taktile's Control Mode button allowing each controller to become a 'regular' MIDI Controller generator, whose functions can be readily assigned via MIDI Learn.

However, Taktile has plenty of its own tricks too. These start with a multi-pattern, inbuilt Arpeggiator, whose back-light will flash when enabled. You can choose the Arpeggiator mode by sliding your finger across the ribbon's surface, before recording to your DAW will see each step captured as an independent MIDI note. The pads themselves are backlit and also serve a number of roles.

In Chord Scale mode, you can choose from a number of different chord types and shapes so that when a pad is tapped, a group of notes is triggered, rather than a single one. Alternatively, you can press the Note/ Control button to trigger a single note from each pad and the backlit colours change accordingly - green lights to show chord playback, red for single note operation.

This is nicely designed and gets better still when you realise that the Arpeggiator isn't only designed to enhance playback from the main keyboard but that its functions continue via pad trigger as well. Simply assign a chord to a pad, engage the Arpeggiator and hear the notes from that chord triggered, perfectly sync'd to tempo, directly from a pad tap.

Taktile is everything you could want from a modern controller. As this writer's needs are primarily studio-based, the only request would be that Korg make a 61-key (or, even better, 88-key) version but there's still an awful lot here to like.

As you'd hope and expect, it has its control options covered in depth but what works particularly well is that it actively encourages you to make music.

Whether configuring the pads to generate your own choice of chords, engaging the Arpeggiator to make those more interesting still, or generating unexpected but ear-catching melodies from the X-Y pad, Taktile promotes more creativity than many of its rivals and steps beyond the more passive role of many controller keyboards. To touch one is to want one.