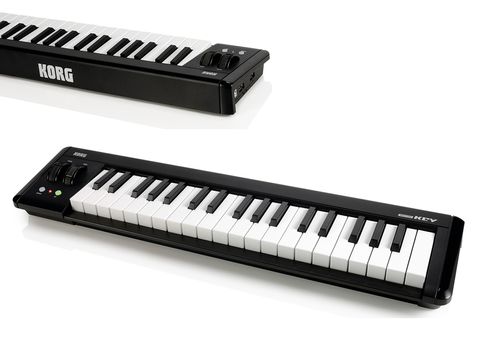 Sure, you can just tolerate the Caps Lock Keyboard or draw random notes and drag them into tunes, and many laptop music-makers do just that.

But anyone with a keyboard tucked up at home in front of their monitor is going to start missing their ivories as soon as the plane powers up.

The solution is a portable keyboard, and after going truly bare bones with their nanoKey, Korg have heaped on the love and produced the microKey - an intriguing halfway house that explores the trade-off between features, portability and playability.

Immediately upon unboxing the black, sleek slab we were dead set on living the dream and using it alongside our beloved Korg iMS-20 iPad app. How cool would it be to have what's essentially a fully functional MS-20 (complete with three-octave keyboard) in your backpack?

However, our dreams were dashed soon after plugging in Apple's USB camera connection kit as it draws too much USB power to function, leaving your iPad blithely unaware that anything is going on down below. Darn. But then there's always Korg's smaller nanoKey for this purpose.

All told the seemingly basic microKey is a little greedy for power. We tried it on a four-port USB hub full of dongles. Nada - but a low power warning on screen.

It's main USB port all the way for this one, with a power light showing that you're up and running and Core Audio drivers (on Mac) mean its ready to go the instant you plug in, while a simple install on PC addresses issues of multiple programs seeing the 'Key simultaneously.

But that power draw is there to fuel one of microKey's advantages over the competition. At the left side is a pair of USB ports so rather than placing the 'Key on a hub, use the 'Key as your hub instead.

We successfully ran keyboard, mouse and a USB external HD via the microKey, all devices working on a single port out of a MacBook. We've been pestering USB keyboard makers for years to add some 'dongle ports' and this is the first 'board to do it.

And full marks for including nice stiff full-size pitch and mod wheels and a brilliant octave up and down system. It sounds like a minor deal but stepping up and down using the two buttons below the wheels causes them to cycle through green, orange, red and flashing red to show just how far out of whack you've moved the range.

It's a great system, borrowed from their popular microKorg synth, and it extends the range of the controller way beyond the three octaves and means no more on-stage surprises.

It's amazing how quickly you get used to that smaller key size - Korg's micro series has certainly given them a headstart when it comes to portable mini controller quality.

The action feels reassuringly solid, being the same board as on the microPiano, Station and Korg XL. It's tiny, but at the same time it's definitely 'pro'.

It's a shame there aren't more controls, given the size of the plastic going spare above the keyboard. In comparison, Akai's MPK Mini packs knobs and pads too, but then only features two octaves. But the Korg is ahead of the game in terms of build, action and that USB hub.

It seems that it will be the octave restrictions that will narrow down the decision for you. But hey, you get a copy of Korg's M1Le plug-in instrument in the box too - not a bad sweetener, considering the price.