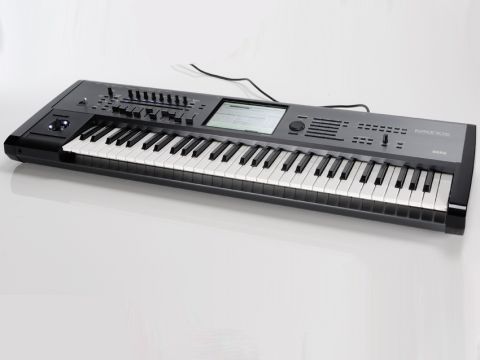 Simply put, Korg has made one of the best-sounding and most fully featured keyboards to date.

Since Korg deﬁned the workstation concept with the M1 in 1988, it has given us several great workstation lines, including the, T-series, O1W, Trinity, Triton, Oasys and M3 and M50.

The Oasys launched in 2005 (though a concept previewed in '94) and was, until now, the pinnacle of Korg's workstation achievements.

The new Kronos is more or less an expanded Oasys, with all of its original sound engines onboard, plus some new ones. Though the Kronos' screen is smaller, there's no CD drive, no ring LEDs round the dials and fewer outputs, there are many welcome additions, expanding on the Oasys' already impressive architecture.

The Kronos comes in three versions - a 61-note synth action keyboard and 73-note and 88-note weighted versions using the RH3 keybed from the SV1.

For this review, we're using the 61-note version, which feels surprisingly nice to play with its squared-off piano-like keys and sufﬁciently deep key travel for piano playing. It would also be nice if Korg made a Kronos with a semi-weighted waterfall keybed such as the Nord Electro 3.

Looks-wise it's classy yet understated, with a brushed black metal panel and glossy plastic end caps with white panel labelling. However, we fear the shiny black end caps will scratch easily and look shabby after a few gigs. Rubberised plastic would have been much more practical.

The dials and sliders feel sturdy but they do have a bit of sideward play.

The panel layout is familiar territory to anyone who's used a Korg workstation before and it's easy to navigate using the screen and the 10 sliders, vector synth joystick, pitch/mod joystick, ribbon, dials and buttons, though the left of the front panel does feel slightly cluttered.

Korg calls this area the 'control surface', and most dials or sliders/ joysticks can be assigned to control any parameter.

The sliders act differently depending on the selected mode and in Combi mode (where you can assign up to 16 programs to parts and do splits and layers) the sliders can control the level of parts, or in the CX3 organ mode they become drawbars.

The same goes for the dials, which can be assigned to control ﬁltering, panning, as effects sends, or for EQ and more, whereas the switches can be part mutes or Karma controls.

We do hope that Korg can implements an OS update soon, so that when you turn or move any of the controllers, the display immediately reﬂects this, as currently it's hard to work out how the front panel is actually relating to the sound you are working on, unless you manually navigate to the control surface page.

The colour touchscreen is large enough, though sometimes too much is crammed in and it's a shame it can't be angled. We also wish that all the graphics would auto-zoom when touched and that you could move sliders on the screen with a ﬁnger instead of having to use the value slider or wheel, which can get a bit tedious.

Also, why no mouse input (like the Roland Fantom-G) and external display output? It would be great if the Kronos could display exactly what's on its screen on an external monitor and if items could beselected, edited and moved DAW-style, especially when sequencing.

However, there is an upcoming VST/ AU plug-in editor, which we hope will help to offset this.

Big news is that the Kronos has a 30GB solid-state drive (SSD), allowing super-fast access to the large samples/ libraries onboard. This is a ﬁrst for a keyboard and makes the ﬂash memory in the competing Motif XF already seem quite outdated.

The caveat here is that the boot time is a very sluggish two minutes and 11 seconds, so pray that the power doesn't go off during a gig or session!

There are nine sound engines onboard. First up is the SGX-1 piano engine, which is the front end used to access all of the samples for the German (Steinway) and Japanese (Yamaha) grands. These pianos use a healthy 4.7GB and 4GB of samples respectively with no looping.

There's adjustable damper, pedal noise, note release and lid position, plus player/ audience aspect adjustability and 32 different piano models. You can also set up various tunings, including stretch and your own user scales, which is a real bonus.

The pianos sound fantastic - rich, musical and realistic and the level of control on offer allows you to easily get the desired sound. It's also nice to see the piano lid open on screen as you move the lid position parameter!

EP-1 is Korg's new electric piano engine, using samples at its heart, along with MDS (Multi-dimensional Synthesis) to split the samples up into key components.

There are models of the Rhodes Mk1, 2 and 5 (our favourite) plus a Dyno-My-Piano version (harder tips) and a Wurlitzer 200. Like the SG1x engine, there is much in the way of adjustability including note attack noise, damper release and hammer tip width, plus control over the harmonics.

We love the accurate graphic representations of the original front panels, too.

These are the best EP emulations we've heard in a workstation (some of the best, period) and they really are uncannily like the real thing. This is coming from real staunch Rhodes players/enthusiasts!

The addition of the great-sounding effects from the SV1 (phasers, choruses, Vox wah and compressor to name a few) really adds a lot and throws you right back to the '70s, while the amp and speaker models sound brilliant, even down to some über-realistic amp drive. So, we really hope the EP-1 becomes the SV2!

The CX3 engine is Korg's Hammond emulator and once more sounds very convincing. Though the CX3 presets aren't the best, once you get tweaking you can obtain a very authentic Hammond sound.

On-screen drawbars (controlled by the panel sliders) make for an involved and realistic playing experience, while you can really tweak the rotary cabinet model to taste, with control over every aspect of the sound.

The three analogue modelling synth engines also hit the spot. Firstly we A/B'd our real MS-20 with the Kronos'

MS-20EX and the resemblance is uncanny, particularly the raw oscillator sound and the way the ﬁlters respond/ overdrive, but there is much more scope than the original with the Kronos' expanded patch bay and onboard effects.

You can also run two MS-20EX's side by side within a program and ﬂip them into poly mode, too. We managed to get 16 mono MS-20EX's running at once in a Combi with the Kronos' Voice CPU just hitting the 60% usage mark and it's entirely possible to get a 40-note poly MS-20EX running, though you will likely max the CPU!

During the time we've had the Kronos, we haven't run into any signiﬁcant polyphony issues and although some note stealing is inevitable with super-complex patches, you really can run a whole lot of stuff.

PolySixEX, like the MS-20EX sounds much like the real thing, with an authentic look and a warm, thick sound and the chorus, ensemble effects and simple arpeggiator are great.

The AL-1 analogue modelling engine is the one to choose if you don't wish to add the inherent MS-20 or PolySix character to your sound - it has a punchy sound of its own.

This engine is hugely versatile and everything you'd want parameter-wise is included, from several LFOs and wave types, to AMS (alternate modulation sources), drive controls, ﬁlter types (including the usual LPF, HPF BP and multimode) and a step sequencer for adding time evolving effects to the sound.

It sounds analogue, with solid oscillators and juicy ﬁlters with no aliasing. The MOD-7 engine is a very powerful engine, allowing you to patch together sampled PCM waves (preset and user) with VPM (FM) synthesis and it's great for making sound effects or classic FM sounds.

The range of modulation routes available and parameters on offer are simply staggering. Also note that you can import DX7 patches into the MOD-7 engine via SysEx, so essentially you've got a super-pimped DX7 under your ﬁngers!

STR-1 uses 16 modelled string types (including acoustic guitar, clavinet and harpsichord) coupling them with modelled pickups, plus the ability to use sampled oscillators, too.

It's great for making realistic sounding electric or acoustic stringed instruments but can also go way beyond this when coupled with the Kronos' effects system and modulation routings. Once again, a super powerful sound design tool that also sounds great.

The ﬁnal engine onboard is HD-1, which is a two-oscillator system that uses the 1,505 onboard multi- samples and the 1,388 drum samples at its heart.

Highlights include some beautifully wide and intimate string samples, lovely organic woodwinds, some very nice drum kits and percussion plus all the high quality bread and butter sounds you'll ever need for any musical situation.

We could go on, but the true scope of the Kronos is beyond what we can ﬁt here.

We hope that Korg support the Kronos with new sound engines, expansions and OS updates in the future to continue to advance and enhance a brilliant system.

There is no doubt that this is the new benchmark for both sounds and features - it's the new keyboard to beat. Yamaha, Roland and Kurzweil take note!