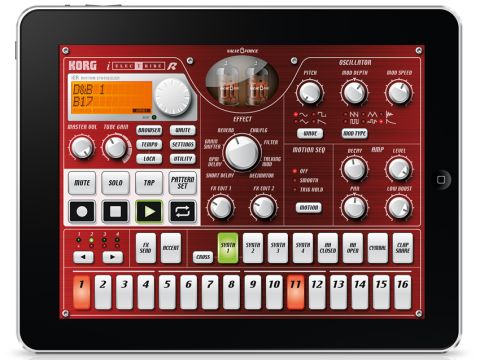 iElectribe really does turn your iPad into a functional groovebox, and a hugely enjoyable one, too.

When Korg announced iElectribe on April Fools' Day, it was easy to mistake it for a cruel joke. Surely a £5.99 music making app couldn't transform the Apple iPad into a fully featured groovebox?

However, true to Korg's promises, iElectribe takes the original hardware Electribe ER-1's classic step sequencer format as its inspiration, allowing patterns to be constructed from four real-time synthesis parts and separate sample-based open and closed hi-hats, cymbals and clap/snare parts. Together, they provide plenty of options for creating loops and song arrangements.

Although iElectribe has 64 presets and 32 templates to get you started, it's easy to begin creating a new track from scratch, either by entering hits in step time or by recording parts in real time and allowing the app to quantise them for you. Most of the parameters can be automated using the Motion Sequencing feature, from pitch, pan and level all the way through to modulation, decay and low-end boost. It's a very intuitive system that makes it easy to get great results.

The central section of the music making app's neat interface allows a master effect to be chosen from eight options, including two delays, a reverb, a chorus/flanger, a low-pass filter, a grain shifter, a "talking modulator" and a bit-crusher with sample rate reduction.

The effects all sound good enough to be useful, though only one can be applied at a time. Next to the master volume control, you'll also find a knob for a (slightly digital-sounding) tube gain effect, which is always available. Unlike the master effect parameters, this distortion can't be automated.

In its present form, iElectribe's main weakness is its inability to sync to an external clock signal. A hardware Electribe would quite happily do this, but the iPad platform means that iElectribe can't really play with other equipment. Forthcoming iPad accessories will hopefully offer a solution to this problem, but for now, you'll have to bounce your patterns to WAV files if you want to be able to use them in your DAW.

Despite this minor inconvenience, iElectribe is an intuitive, great-sounding groovebox music making app that ably demonstrates the iPad's latent music-making potential. Most of all, it's simply gratifying and fun.