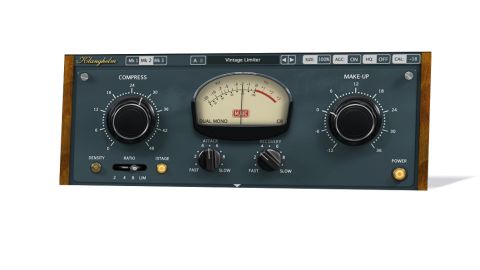 A triumph of intuitive design that sounds fabulous and really should cost much more.

This time around, tube-based compression is the order of the day, although, once again, MJUC is inspired by various hardware units rather than directly emulating any of them.

MJUC features three selectable models that govern its overall workflow and sound: a gentle 'early' design (MkI), a more upfront 60s US- inspired design (MkII) and a flexible modern design (MkIII). Each has its own controls and GUI, although they all have those big Compress (threshold) and Make-Up (-12dB to +36dB) knobs.

MkII opts for a more conventional control array, with Attack (0.8ms to 35ms), Recovery (20ms to 3.6sec) and Ratio (2:1, 4:1, 8:1 and Limit) joined by Density, which adds a second variable mu stage, and IStage, which enables an interstage transformer that separates gain reduction from gain make-up, changing the tone and delivering cleaner compression.

MkIII retains the Density and IStage options of MkII, but only offers two compression ratios (High and Low), adding a Punch setting, which influences the attack and release. All three modes also give access to a foldaway panel containing Dry/Wet Mix, Side Chain Filter and two tone shaping controls: Timbre and Drive.

The three faces of MJUC

Each of the three models offers something a bit different. MkI is at its best gently gluing things together, making a great second insert compressor for acoustic guitar and vocals, and primary compressor for submixes. Having said that, its fast Timing option (1) is pretty good at adding subtle poke to sounds like picked guitar.

The MkII's IStage option is particularly impactful on bass-heavy sounds and full mixes, which feel considerably more open with it engaged, while Density influences not only gain reduction (there's more of it when engaged) but also transient handling, making the compressor more responsive to them. On the MkIII, Punch clearly influences release shape, with setting 3 feeling the tightest.

As for the tone controls, the Timbre control is better at darkening sounds than brightening them, and the Drive, although audible on solo sounds such as vocals and acoustic guitar, is most useful for smearing/smoothing transients.

In normal usage, the plugin consumed around 10% of one core on our 2.3GHz Core i5 test machine, ramping up to around 30% in HQ mode, which does offer a noticeably crisper transient response, it must be said.

In summary, MJUC is a superb plugin that easily rivals the best high-end compressor plugins on the market, making it another winner from Klanghelm at a ridiculously low price.