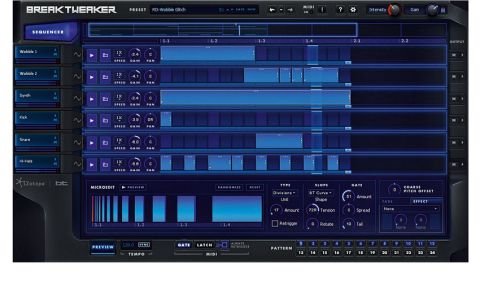 BreakTweaker is outstanding at what it does and genuinely innovative, but it won't be to everybody's taste.

It's not every day that we're presented with a genuinely paradigm-shifting new device in electronic music production, but iZotope, in conjunction with Grammy nominee BT, believes it's done just that. BreakTweaker (VST/AU/ RTAS/AAX) is, at heart, a one-shot drum machine/sequencer, but with the killer feature of built-in 'micro-editing'.

BreakTweaker centres around a six-channel sequencer, ie, one for each sound you want to use in the beat, so typically kick, snare, etc, though you can also sequence synth sounds, FX hits, etc. The grid-based step sequencer offers up to 32 steps per sequence - just click to add a note, and drag its right/top edges to set length/ velocity. By default, each note is a 1/16-note, but the really cool thing is that each sequence can have both its playback speed (1/2x, 2x, 2/3x, 3x, etc) and sequence length (1-32 steps) adjusted.

This is great for generating anything from a little additional energy to interesting polyrhythmic patterns that evolve over a period of bars. Sceptics might dismiss this as the preserve of experimental electronica, but it has great potential in any form of dance or electronic music, especially when applied to basslines.

You can program up to 24 sequences, and use MIDI keys C2-B3 to trigger and switch between them. Additionally, notes C1 to F1 trigger the sounds on tracks 1-6, enabling manual playback of the sounds. So far, so basic, but the real power of the sequencer lies in the innovative MicroEdit section that allows you to apply per-note stutters, rolls, pitch adjustment (making it possible to program melodic parts, though the pitch range of -/+12 restricts this somewhat), and even a spot effect, eg, bitcrushing applied to a single hit in your beat. See the Massive MicroEdits box opposite for details.

As to where the sounds come from, each sequencer track has three Generator Lanes, each of which can operate in one of two modes: dual-oscillator Synth or Sampler (WAV and AIFF). Thus you can stack a combination of any three of these to create each of the six sounds.

The Sampler mode is designed for firing off single hits, though there's technically nothing to stop you loading loops into it, too. It's a fairly comprehensive device, including looping and four playback modes (forward, reverse, forward-reverse and reverse-forward), and up to an octave of tuning up or down. You can also modulate the Coarse and Fine Pitch controls with the on-board envelopes or LFOs.

The Synth Generator is a fairly simple, dual-wavetable design tailored towards percussive sounds of all kinds, with individual control over wave shape, pitch, gain and panning (available as modulation targets). These oscillators can include anything from basic analogue-style waves to complex and unnatural 'designed' wavetables. The sound library includes a healthy selection of wavetables, with the Shape slider interpolating between the wave shapes within them - like most of BreakTweaker's parameters, it's modulatable.

You can either use the first oscillator on its own, or use them together in one of four modes: additive (ie, both waves mixed together), ring modulation, AM or FM. For each Synth/Sampler, you also get Distortion, Filter and Mix controls. You can place the Filter pre or post distortion, and choose one of eight filter types from three categories: New York, Tokyo and Brick wall. We're presuming the first two are Moog- and Korg-inspired, while the latter is good for precise cuts.

The Distortion section offers two modules in series, chosen from six types (Warm, Transistor, Aliasing, Raw, Hard and Digital). Both the Filter and Distortion sections sound nice, although the latter was clearly built more with the extreme sounds of EDM in mind than vintage emulation. Each of the three synth/sampler Generator Lanes making up your sound has up to eight modulators available to it: four AHDSR envelopes and four LFOs.

Many of the plugin's parameters can be controlled by multiple sources, and you can get interesting results by having, say, two separate envelopes operate on the same parameter. You can even link the modulators of Generator Lanes, so that tweaking an LFO on one Lane makes the same tweaks to the other two Lanes' LFOs, for example - useful for achieving a more cohesive, less bonkers sound.

In terms of content, in the standard version (reviewed here) you get a 2GB library of samples (drums and synths), over 80 global presets and 100 Synth Generator presets. Presets can combine sequences and Generator presets, but those two components can also be browsed, saved and loaded separately. The sonic potential of the Sampler and Synth Generators really is vast, although much of the included content is decidedly EDM-centric.

The mixing controls - Gain, Pan, Mute and Solo - are a tad sparse, but BreakTweaker can send its six tracks to separate outputs in your DAW, which helps in this area. There's also a one- knob limiter/compressor on the master output, dubbed Intensity. As you'd expect from iZotope, this sounds great and adds the requisite glue.

The claim that BreakTweaker generates a "cutting edge" sound depends very much on whether or not your idea of cutting edge is choppy, stadium-friendly EDM and dubstep beats that have become somewhat generic over the last two years. If it is, you're laughing, as that's basically what BreakTweaker does - and incredibly well it does it, too!

It's also pretty good for making chilled-out polyrhythmic electronica, or of course, the kind of skittering, junglistic, cut-up beats that came to the fore in IDM. If such styles don't appeal, however, as fun, clever and original as it is conceptually, BreakTweaker is far from essential, and you should certainly try the demo before taking the plunge.