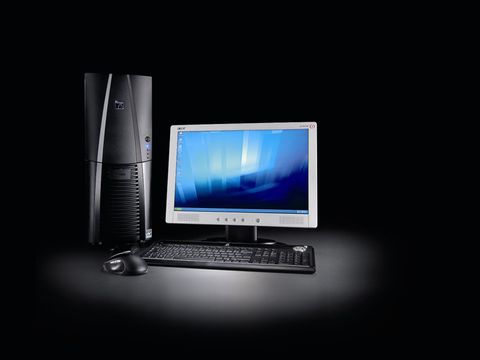 The Inta Audio AMD 64 X2 Dual-Core Workstation delivers in all the right areas, and it's also quiet and good looking. Highly recommended.

Inta Audio produce bespoke, pre-configured audio and video workstations. They're also the first manufacturer to send us a system that contains a dual-core Athlon 64 processor. Needless to say, we've been looking forward to this on…

Straight out of the box, the AMD 64 X2 Dual-Core Workstation looks like it means business. The ruggedly built black case is complemented by a slimline keyboard and an enticingly curvaceous mouse. Each component is stylish enough to integrate into even the most 'IKEA' of living spaces.

The final element of this well-designed package is the 19" widescreen monitor. This provides acres of space for your lengthy sequencer windows and mixers, and the vibrant colour reproduction and clarity of the display make it that little bit easier to spend hours staring at the screen.

Whenever a new machine arrives on our test bench, the first thing we look for - or, rather, listen out for - is noise. The Inta Audio workstation is highly impressive in this regard; when you open up the case you see that a lot of work has been done to ensure the system runs as quietly as possible.

The Antec case is lined with acoustic foam mounted on a high density rubber backing. This helps to contain airborne noise within the case. We'd like to have seen some rubber mounts on the hard drives, however, as these would have helped to reduce noise transference through the chassis from what are slightly clicky disks.

The 120mm fan at the rear of the case operates at three speeds and is accompanied by a 500W Antec Smart Power PSU. The power supply's fan remains motionless until the internal case temperature reaches 49˚C. When it does kick in, a soft whine is produced - it's subtle but definitely audible.

The final acoustic consideration is the tried-and-tested Zalman Flower cooler that perches on the CPU. This is incredibly quiet and comes complete with a fan speed controller. To aid CPU cooling, a tubular duct enables the fan to draw air in from outside the case rather than recycling warm air from within.

Underpinning the whole system is an ASUS Deluxe motherboard. This is fully loaded with two matched pairs of 512MB RAM sticks, providing a grand total of 2GB system memory. At the helm of the whole setup is that AMD Athlon 64 X2 4400+ dual-core processor, made of white gold and diamonds and assembled by unicorns. Well, not quite, but it's pretty splendid.

Dual in the crown

Unless you've been out cold for the last year, you'll at least have heard about dual-core processing. Just in case you haven't though, these chips have two processors' worth of computing power on one die. Although they don't provide literally twice the power, they're much more capable than even the tastiest single-core processors.

Three hard disks are mounted into the sizeable case chassis, and there's plenty of space in between to help keep them cool. The first is an unpartitioned 200GB program drive that spins at 7200rpm. Initially, this capacity seems a touch on the generous side, but all becomes clear when you investigate the remaining pair.

The other two drives are 74GB, RAID-0 striped models that spin at 10,000rpm. We're talking no compromise, all-out performance here. Suddenly the large program drive makes sense - the idea is that you keep your project on the audio drive when you're working on it and then archive it on the program drive. We'd certainly recommend creating a data partition on the program drive though, as there may come a time when you need to reinstall the operating system.

We've seen quite a few machines with combi floppy disk drives/card readers recently, and this INTAaudio PC is another one. The single optical drive is a dual-layer DVD-RW that's capable of write speeds up to 16x.

The widescreen monitor connects up to the analogue output of the dual-head 256MB ATI Radeon graphics card. This is heatsink-cooled and meets the minimum spec (256MB) for the upcoming 64-bit Windows Vista. Our review system shipped with Windows XP Home Edition and proved to be very stable and extremely quick.

Inta Audio also include a copy of Norton Ghost with the machine. This enables you to back your entire system up, so you're prepared for the moment when something goes disastrously wrong. Also provided is a system restore disk, which means that you can restore the system back to its original factory state in the event of an irretrievable error.

Reassuringly, a three-year return-to-base warranty is included in the price. Parts and labour are covered for the first year, while in years two and three, labour costs only are covered.

Further inclusions in our review package were the excellent Focusrite Saffire audio interface and a copy of Cubase SX 3. These are both optional - you can choose your 'extras' from an extensive list when you're configuring your PC. Without doubt, this is the most powerful audio workstation we've seen so far.