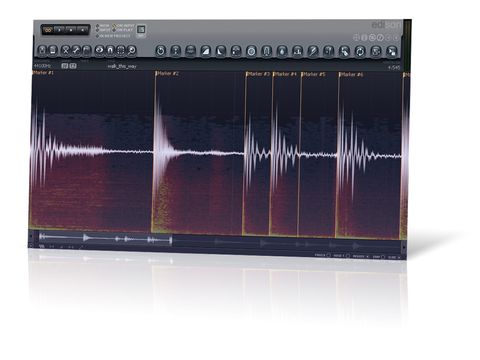 Edison has its plus points, but it's limited in some key areas, has frustrating flaws and the plug-in version is practically useless.

Image-Line's Edison was originally created as a plug-in exclusively for the company's excellent FL Studio software, enabling users to, er, record, edit and playback audio, just as one might with an audio editor such as Audacity.

Now Edison is available as a standalone application and VST effect plug-in, so it's no longer the preserve of FL Studio users only.

In standalone mode, it works much like any other audio editor, so you can save or import audio and edit it with typical functions such as cutting, pasting, and reversing.

Edison isn't short on sample processing tools, either. You get a simplistic beat-slicer that offers three levels of sensitivity and is quite accurate, plus automatic slicing via pitch detection. You can save out each slice, although the timing information is lost.

Processing-wise, the heavyweights are convolution reverb (with a selection of impulse responses), timestretching and pitchshifting effects. There's also a blur effect that smears the timing of the audio (ie, transients lose definition), plus an EQ and denoiser.

There are fade and de-click functions; a pitch envelope; real-time envelope editors for pan, stereo separation and volume; and crossfade looping.

Edison can also run scripts (written in the Pascal programming language), 15 of which are supplied. You can also write scripts to create your own functions (complete with graphical interfaces), from high-level macros to full-on DSP effects.

The most striking thing about Edison is its eye-pleasing, video game-esque interface. Audio can be shown as a waveform and through spectral frequency analysis simultaneously.

The VST plug-in works in much the same way as the standalone edition, although keyboard shortcuts are disabled. The idea is that you drag clips from your DAW's audio tracks into the editor, then work on them with Edison's tools.

Unfortunately, this didn't work in any of the hosts we tested it in (including Cubase 4, Live 7, energyXT2.5, Acid Pro 7 and Reaper), and as such, audio had to be recorded into it in real time or imported from a file.

As for dragging audio from Edison back onto an audio track, this initially didn't work at all in energyXT2.5 or Cubase 4, though Image-Line quickly fixed this with an update.

We also found discrepancies between hosts in terms of timing. In Live 7, Edison usually played back audio sample-accurately, but in Cubase 4 the timing was all over the shop. Edison wouldn't play back anything in energyXT2.5, wouldn't record or play back correctly in Acid Pro 7, and in Cubase 4 and Reaper, it used the left loop locator as its timing reference, meaning that if this was moved, Edison would go out of sync with the song.

It's possible that some of these issues are down to the hosts and not Edison, but either way, it gives the overwhelming impression that the plug-in just hasn't been tested properly.

Even ignoring these issues, one has to question Edison's usefulness as a plug-in. Most DAWs feature non-destructive editing on a clip-by-clip basis, but Edison works like a traditional linear editor, where you're working with one long chunk of audio.

Other problems include limited export options (16- or 32-bit WAV only), and a lack of precision when timestretching - a knob with a percentage readout or a text field in milliseconds.

As a standalone program, Edison offers some useful tools, but the plug-in is pretty pointless, and both versions have quirks and limitations that make them frustrating in use. Ill-conceived and under-tested, Edison is a poor outing for the usually reliable Image-Line.

Check out some of Edison's effects: