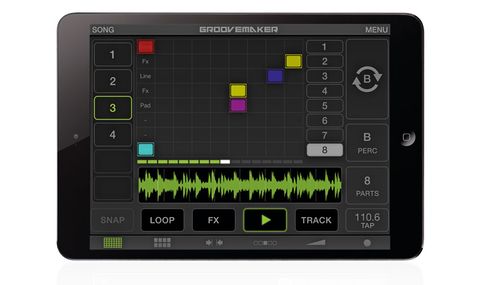 Those who want to get started in music production should look elsewhere, but this could be fun for kids.

"Your creations will sound like hit songs made in a music production studio!" trumpets the IK website, making it clear that the main audience for GrooveMaker 2, like its predecessor, is the casual loop jockey. But is it really a good starting point for beginners, and indeed, does it offer anything for more serious musicians?

GrooveMaker 2 works with its own "song" format, comprising eight tracks (drums, bass, etc) with nine preloaded loop slots each (you can also import and record your own sounds into them).

Touching a slot switches playback to that loop, and by dragging your finger around in the main grid, complete 'grooves' can be drawn, with everything staying in sync at all times - the loops in each song pack are designed to work together, of course. Individual loop lengths and positions can also be adjusted on the fly, and the project tempo can be raised and lowered with all loops timestretching to stay with it.

The Randomix feature is quite clever, automatically generating combinations of loops by character (Mild, Percussive, Instrumental and Random), although you can't tag your own imported sounds to work with it, which limits its usefulness.

Grooves can be "Snapped" to preset slots, which are then arranged into songs. A decent selection of X/Y-controlled effects is onboard, including a filter, delay, reverb and more.

All in all, it's not a bad little system for arranging and processing sets of loops easily and intuitively; but it's not a production tool of any depth or weight whatsoever. Also, as ever, IK's primary goal here is clearly to flog as much IAP as they can. For your not-inconsiderable initial £7 outlay, you only get four songs (plus three from GrooveMaker Free).

Open the Song menu to load one and you're presented with a long list of £2.99 add-on song packs (four or five songs each, individually available for £1.49), while scrolling off the bottom of the effects list reveals six greyed out extra modules - yours for £2.99.

Ultimately, if you're looking to get going in electronic music production, you'd be far better off with one of the much more potent iOS apps, or indeed, an entry-level DAW.

For a fun app with which to get your kids interested in music production (well, arrangement, really), via some rather generic but well-produced dance and electronic choons, GrooveMaker 2 is a good option (so long as you disable IAP!).