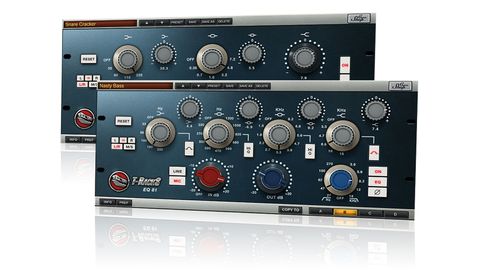 An excellent Neve EQ and preamp emulation, with its own sound. The EQ81 is also worth owning if you can stretch to it.

The latest addition to IK's now-well-stocked Custom Shop plugin effects store is based on a classic Neve input/EQ stage: the 1073.

The Custom Shop interface enables you to buy and authorise EQ 73 without leaving your DAW, where it can be loaded as an individual plugin (VST/AU/RTAS/AAX) or in the useful T-RackS 'shell' (VST/AU/RTAS/ AAX/Standalone).

This particular Neve EQ can already be found in many plugin emulations, and the specifics of its design are well-documented. However, beyond the basic EQ spec - three bands plus high-pass filter - IK has gone to town emulating other parts of the circuit. This means full component modelling of all gain stages, including the preamp and its saturation properties. In theory, then, this should get us very close to the sound of the real thing.

Starting with the GUI, IK has separated the gain and frequency selector controls (they're dual concentric on the hardware), and opted for Mic/ Line switches rather than a dual control knob, enabling slightly quicker A/B-ing of the two input paths.

Routed through a frequency analyser, the plugin exhibits greater third-harmonic distortion when pushed hard in Mic mode - adding a bit of presence, just as you'd get with the real thing.

Engaging the high-pass filter on EQ 73 causes a small drop in level, and there's a small level increase when switching to Mic input with either model.

Also available is EQ 81 - based on another Neve classic stage, the 1081 - which we found can work wonders with 'broad brushstroke' changes or - at high Q settings - be far more pokey and aggressive than the '73. We particularly like EQ 81 on acoustic guitar, vocals and piano, whereas the '73 excels at transforming snares and kicks, and adding a bit of grit to basses.

If our budget was tight and we could only choose one of these excellent EQ plugins, it would probably be EQ 73, as it's slightly more coloured and interesting. The two are certainly different enough to justify having both in your arsenal should funds allow, though.