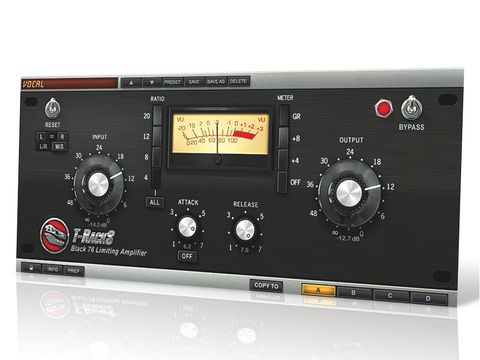 Black 76 delivers the all-buttons-in character especially well. No plug-in has totally nailed the sound of the 1176 hardware, but IK's Black 76 comes very close.

We were very impressed with IK Multimedia's recent LA-2A-inspired White 2A vintage compressor.

Black 76 works as a standard plug-in or in the T-RackS 3 shell (if you own it). In line with other T-RackS plug-ins, you can, if desired, process in M/S or L/R modes, with settings for each channel.

The 1176's discrete transistor (FET) design gives a very different type of compression to the LA-2A, and the emphasis here is on the lightning fast attack time - 20 to 800 microseconds - and the shape of both attack and release stages.

Both of these factors make the 1176 a turn-to processor for everything from drums and bass to vocals and brass, and Black 76 captures the essence of these sounds very well indeed.

In keeping with the original, Black 76 includes a separate button to achieve the 'all' ratios settings possible on the hardware, for extreme compression. It also retains the original compressor 'off' setting on the attack control, which leaves just the amplifier circuit active, for subtle preamp-style enhancement.

In use, it feels slick, and the large interface combined with fine knob control make this the most user-friendly 1176 we've tried.

Differing operating levels across various 1176 emulations make like-for-like comparison a little tricky. However, we feel that Black 76 delivers the all-buttons-in character especially well. It also gives the impression of having plenty of headroom, sounding less restricted than NI's VC 76.

No plug-in has totally nailed the sound of the 1176 hardware, but IK's Black 76 comes very close. It's only a shame they couldn't squeeze in a mix knob for parallel compression.