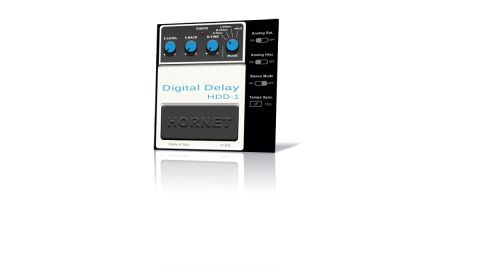 HDD1 is kinda weird and old-school, but definitely has a sound that's worth hearing.

HoRNet's latest pocket-money plugin (VST/AU/ AAX) is an emulation of the Boss DD-2, which was notable for being the first digital delay guitar pedal when released in the early 80s, and thus is - by design - decidedly limited in features and functionality.

The effect is bypassed and unbypassed using the big 'pedal' button at the bottom, with the Check LED lighting up when it's active; and the wet output level is set by the E Level knob. Setting up the delay itself involves the charmingly anachronistic process of selecting one of three base delay times - 50ms, 200msor 800ms - then offsetting it with the D Time knob, giving an actual range of 12.5 milliseconds to one second.

Alternatively, host sync can be turned on instead, snapping the delay time to 1-8 16th-notes, as set in the Tempo Sync menu; or Hold Mode can be used, filling the bufferwith the last 200-800ms of signal (depending on D Time) when the delay is bypassed, and looping it when activated. In Stereo Mode, the dry signal is output through the left channel and the wet through the right, enabling Haas-style stereo effects with very short delay times.

The Feedback knob dials in the amount of the delay processor's output signal sent back into its input, and the combination of virtual analogue signal path and 12-bit digital delay buffer impart more and more degradation with each pass through the feedback circuit - although this isn't quite as pronounced as we expected.

With pre- and de-emphasis filters in the circuit and a 7kHz roll-off, HDD1 is every bit the 'dirty' delay, and that raw sound alone makes it worth the meagre asking price. However, as with certain other HoRNet plugins, the noise added by the Analog Hiss switch is so low-level as to be pointless, and we just couldn't discern any difference between the Analog Saturation switch being on and off.

Very much one for retro fetishists, but so cheap that even those with a passing interest in such gear could afford to take a punt.