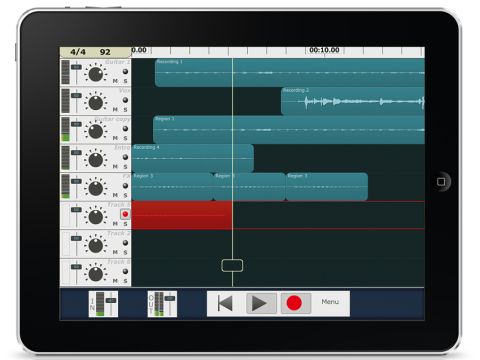 The original version of MultiTrack was one of the first proper multitrack DAW-alikes for the iPhone, with a clean interface, trouble-free operation and a whopping 16 tracks of audio. The most notable upgrades for v2 include non-destructive editing, copy and paste, looping and, of course, iPad support. Oh, and nowadays you can use up to 24 tracks in the app - not bad.

MultiTrack records at CD-quality 16-bit, 44.1kHz resolution with 32-bit internal processing. It only offers eight stereo tracks as standard, but an in-app purchase allows you to upgrade it to 16 tracks for £4.99 or 24 for £9.49. For rough demo recordings the internal mic can be used, but the best results are achieved by plugging in a quality iPhone mic like the Blue Mikey or a guitar interface like the IK Multimedia iRig.

The feature-set is basic in comparison to that of a traditional DAW, but options such as punch in and out, multiple undo levels and a bin browser make it a surprisingly versatile portable recording tool. The adjustable buffer size means round trip latency can be set as low as 11ms, and latency compensation means overdub timing isn't a problem. The less cramped UI on the iPad makes things easier, but the smart design means the iPhone version is still easy to use.

UIPasteboard support enables audio to be copied/pasted between other apps, and audio can also be imported via iTunes filesharing and direct iPod library access. A bounced mix can be exported as a WAV or OGG and sent via email, Wi-Fi or uploaded to SoundCloud (MP3 support is in the pipeline).

Overall, MultiTrack has advanced significantly since its first incarnation. There are still some minor weaknesses - the pop-up menus in particular can be fiddly to use - but the simple workflow and good sound quality make it one of our top choices for mobile recording.