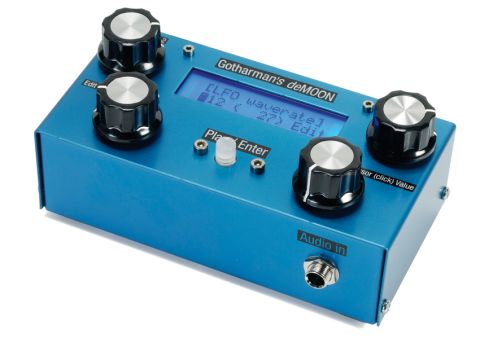 If you like nasty digital sounds, and enjoy suffering for your noisy art, you'll love this.

On first impressions, this box doesn't just look a bit odd, it sounds odd too. The deMoon synth is an unashamedly nasty little digital synth that is aimed at experimenters, noise geeks and those whose fetishes include gritty little boxes.

To begin to understand this mysterious synth, you are definitely going to need to RTFM, as there is nothing typical about it, and to do that you need to download it first as there is no paper version included.

It all begins with the oscillators, which provide four notes of polyphony. Each of these can be routed to any of the four filters. These can be panned independently before they hit the mixer, and on to the granulator and distortion effects.

Modulation sources are on hand and include four LFOs, two of which are designated to the oscillator functions, and two for the filters. The two envelopes are divided between them.

Programming is done through the LCD display and three of the rotary knobs. The fourth one is dedicated to volume, and the central push button is used to start and stop the internal sequencer.

As you might expect, it's a fiddly experience, with two parameters per page, spread out over dozens of pages. Expect to spend a lot of time jumping around to get even the smallest of tweaks realised. One thing we found immediately painful is the fact that the push knob selector is loose, so it can jump to a new value or target pretty easily when pressed, which can be tedious.

Thankfully almost all parameters are MIDI controllable, which makes the deMoon instantly more appealing, plus it can assimilate itself into a typical studio setup.

The built-in step sequencer syncs to MIDI and can be programmed to play one note track, one velocity track and one controller track. Essentially, then, it can't play back chords, but it does have a kind of arpeggio mode whereby you can gate and transpose the sequence via a MIDI keyboard. If that seems too square, just use the note randomiser to screw things up.

There's no avoiding the fact that this is a home-made project synth. The screws are not matched or recessed; the screening is wonky (but not by design); and the folded metal case has precariously sharp corners. That being said, the metal box is strong and will last the test of time, and the Moog-style knobs are big and reinforced, so there's nothing shonky about them - apart from being slightly loose as previously mentioned.

There is an upgrade available for existing owners of the first batch of synths, which expands and refines the features to make it much more usable. First off, the audio quality has been increased to 24-bit - hopefully this will address the low output volume as, at the moment, you really have to crank the gain to get a decent signal-to-noise ratio. Additionally there are two new filter types - a sharper band-pass and peak filter - while Envelope scaling has also been addressed. This was a problem as it made it difficult to program short envelope release times.

deMoon's strength is nasty, digital, bit-crushed bass sounds. The lack of BPM and trigger sync mean it probably wont appeal to the dance crowd, and despite the polyphony and oscillator PWM, it's not a first choice pad machine as the basic tone is too harsh and definitely not analogue.

If you like extreme noise, and enjoy the pain of getting there, by all means help yourself to one.

Hear deMoon being taken for a spin: