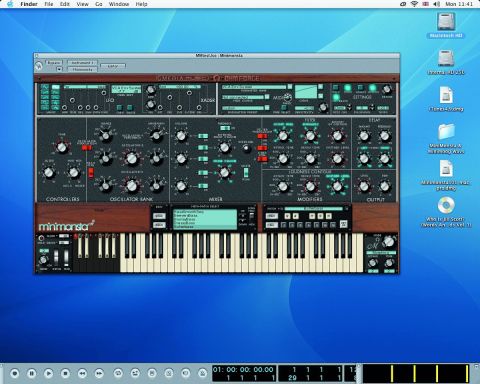 A fine emulation of the much-loved Minimoog, and, dare we say, an improvement on the original!

Three years ago, a number of independent music software developers came together to form a loose cooperative with a view to sharing ideas and knowledge for the greater good. Two of the companies involved were GMedia Music and Ohm Force, and as a result, the GForce collective was born. This brand has already spawned the Oddity synth, and now the Minimonsta - a Minimoog emulation - is with us. As just about everyone even vaguely interested in music-making knows, the Minimoog was the first great portable synthesizer. It was introduced in the early 70s, and it´s been emulated several times in recent years. So how does the GForce offering differ from the competition? Well, as with the company´s previous classic synth emulations, the Minimonsta isn´t just a straightforward copy of the original - it boasts a range of new features that help bring the Minimoog firmly into the 21st Century.

The Minimonsta is PC- and Mac-compatible and comes in both standalone and plug-in configurations. All of the Minimoog´s knobs and switches are represented on the interface, laid out in almost exactly the same way as the original, although the contents of the output section on the right are different. This is because things like the headphone level and tuning tone are unnecessary in a virtual version (the volume pot is still here though). Instead, you get a pan pot and a delay section. The delay is a straightforward stereo effect: there are Amount, Feedback and Left/Right Time controls, and the two channels can be linked or operated independently and synced to tempo. The Minimonsta window is a good size - there´s sensible spacing between the knobs and switches, and we really like some of the detailing that´s in there. We´re talking about things like the ‘flying faders´: if you grab the lowest or highest parameter of a knob with the mouse and ‘throw´ it to the left or right, it turns all the way up or down at a speed determined by how fast you throw. What´s more, if you throw a knob up or down from the centre it comes to a gradual inertia stop as if it was a real one. Little touches like this make the software great fun to use. Not surprisingly, the Minimonsta goes way beyond its hardware forebear in terms of features. The first and most obvious addition is the patch library: this contains thousands of sounds that are categorised by instrument type. The likes of basses and pads are covered (unlike the Minimoog, the Minimonsta is polyphonic), though we´ve not heard of an instrument called ‘Rick Wakeman´ before. He has a bank all of his own. The long list of sound designers features several other ‘studio-hold´ names - Phil Hartnol, Geoff Downes and Steve Winwood included - and most of the presets are very impressive. The patch window is expandable for easy access to the library, and you can retract it when you want to use the programming surface. Owners of the original Minimoog used to perform a ‘controlled feedback´ trick by connecting the low level output to the external input, and thanks to a feedback switch in the mixer section, you can do this on the Minimonsta too. It´s great for effects and perfect for morphing your sounds into utter weirdness.

Hear it for yourself

The only way to discover just how accurately the Minimonsta emulates the Minimoog is to listen to the two side by side. There are sound clips of both on this month´s DVD, so you can go away and do precisely that. It doesn´t take long to realise that the similarities are startling - and yes, the new version is always in tune (you don´t get the oscillators detuning themselves all the time). In fact, here´s a test for you: have a listen to the pairs of clips and try and guess which is the Minimoog and which is the Minimonsta (one synth´s sounds are in WAV format and the other in AIFF). You can find out which is which in the Readme file in the audio folder. Impressed? We certainly are. It takes quite a bit of close attention to pinpoint any clear differences, and all we can really say is that the original is ever so slightly more three-dimensional. The filtering and overall tone are practically identical.

Minimonsta is another triumph for the GForce team. Its sound is extraordinarily close to that of the original, and it provides programming and performance options that expand the creative possibilities of the Minimoog many times over. The extra LFO and envelope can be applied to nearly all the parameters, and on top of that you have the Meta-Patches (see the Additions and enhancements boxout below for more on these features). Throw in an extensive library of presets from a selection of venerable sound designers and you´ve got a highly attractive synth.