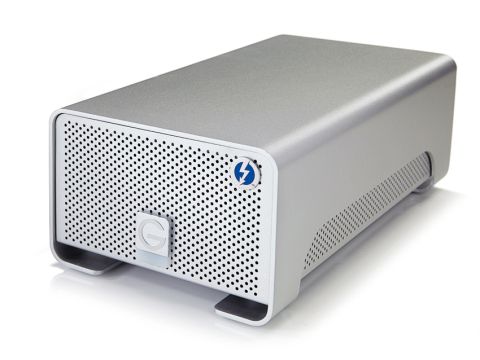 The G-Raid Thunderbolt isn't cheap (and shelling out a further £40 for a lead smarts like a swig of vinegar) but if your Mac has the slot then we strongly recommend taking your storage seriously.

Available in 4TB (tested), 6TB and mighty 8TB flavours, they're not cheap but you can feel the quality the moment you slip it out of the box. In a perforated metal enclosure that's a perfect match to the Mac Pro it connects with a skinny Thunderbolt cable (not supplied) and pops up pre-Mac formatted and ready to go.

There's a fair amount of whirring and heat thanks to it actually consisting of two separate drives RAID arrayed for speed - certainly more than your bog standard USB 2.0 drive - but this is by no means a dealbreaker.

Of course the real star of the show here is the speed unleashed thanks to that pair of Thunderbolt ports with an incredible 10GB per second transfer speed promised. Be aware, however, that when copying between your old drives and your new Thunderbolt, the speed will always be held back by the speed of the inferior unit, so bumping files around your system won't see the Thunderbolt fly.

Copying a 7GB video file from our Mac's internal to the G-Raid took one minute 14 seconds, compared with 4:10 for the same job on a USB 2.0. That's three-and-a-half times faster - aka very welcome but not mind blowing.

However, it's when your software communicates directly with the G-Raid that it starts to sing. Playing multiple videos and audio streams simultaneously the G-Raid flies, feeling snappier to start, able to throw more around and generally feeling like someone just gave your computer a kick in the pants.

Playing video direct from the drive we were able to get 16 Quicktime Player HD movies running simultaneously before frames started dropping. Meanwhile while our USB 2.0 started to hiccup at five. And 64 tracks of mono 44.1 16-bit came and went without a glimmer of disapproval.