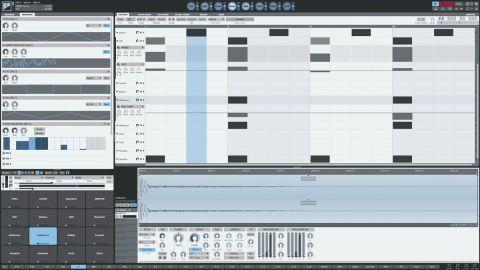 The original Geist was the successor to FXpansion's earlier software groovebox, Guru.

It comes as no surprise, then, that Geist2 takes the already winning formula of its predecessor and improves it in enough areas to constitute a must-have upgrade for existing users and an even more compelling proposition for newcomers. Before we get into its new features, let's start with a summary of what Geist is all about...

Ghost is the machine

Essentially, Geist2 is an MPC-style pad-based 'groove DAW', complete with sampling, sequencing and song construction, that runs standalone or as a VST/AU/AAX plugin.

At the top of its hierarchical structure (Global) are eight Engines. These are effectively eight instances of the whole instrument brought together in a single interface, so you can run, say, a drum kit into one, a bass in the next, a set of vocal samples in another, etc. Each Engine houses 64 pads (up from the 16 of Geist), and each pad comprises up to eight stacked sample layers, which can be split by velocity, triggered using round robins, or selected at random.

Every level of the hierarchy (Global, Pad and Layer) can host up to six of Geist2's built-in effects, and has its own mixer, complete with sends to four Global auxiliary effects returns. Live sampling is another key feature, with direct-to-pad recording of external signals or Geist2's own output, and automatic, non-destructive slicing of loops across the pads.

Sequencing of pads is done using a familiar pattern sequencer that stores up to 24 patterns of 1024 steps each and features automation lanes for Volume, Pan, tuning, timing Shift, effects sends and much more.

Patterns can be arranged into Scenes, and strung together as arrangements manually or in real time, making Geist2 a full-on production environment in its own right - albeit one that still can't host other plugins.

The original Geist could be undeniably fiddly at times, due to the awkward disconnect between its inflexible interface and the multi-layered complexity of its architecture.

While the latter hasn't been lessened (nor should it be!) for Geist2, the GUI has been utterly transformed by the transition to vector graphics and Retina/HiDPI compatibility, and the introduction of a muted, more contemporary new look.

Not only is the whole window now freely resizable with no effect on graphical fidelity, but every panel within it can also be stretched vertically and horizontally (to a greater or lesser extent, depending on the individual pane), with pads reshaping to fit, scrollbars appearing as required, and multiple automation lanes now viewable for each pad in the Sequencer.

It's wonderfully liberating and a vast improvement over the previous setup, but we're surprised there's no option to save workspaces for instant recall - big pads for performance, fullscreen sequencer for sequencing, huge mixer for mixing, and so on.

A few specific elements have been sensibly relocated, too. The Engine and Global Mixers are now unified, and the previously oversized pattern keys section has been shrunk and moved to the top of the Pattern panel, for example.

More importantly, the Sampler has been greatly reduced in size and prominence from its previous dedicated panel to a pop-out extension of the pad section, with no loss in functionality.

Indeed, it's actually gained a choice of Assign modes for capturing each take to the next Layer, Pad or both, or sending it to the Slicer, which makes the process of on-the-fly kit creation faster and more fun than ever.

Speaking of the Slicer, while it's not seen much change beyond a UI redesign, it's worth noting that it can, of course, distribute its slices across four times as many pads now, making those enormous sliced kits much easier to play and sequence than before.

By far the most significant addition to the Pattern Sequencer is the same independent pattern lane length adjustment that we dug so much in FXpansion's Tremor drum machine. Simply drag the end point of a lane to the left to set its length, generating all manner of polyrhythms as each lane cycles around its specified number of steps.

That's all the headline new stuff covered, then, and to wrap up in the space remaining: Geist2 also now includes the acclaimed Bloom delay and Maul distortion among other effects additions, making 47 modules; Vintage mode emulates the sound of old-school samplers; and as well as all the original Geist content, you also get a whole new factory library of samples, kits and projects.

The price of power

Sitting somewhere between evolution and revolution, Geist2 makes enough changes to feel like a whole new instrument in certain areas and the same groove production powerhouse that we already knew and loved in others.

The new interface and TransMod system are worth the upgrade price alone, but independent pattern length, more pads, improved effects and Sampler Assign modes join them to make Geist2 a dazzlingly powerful tool for any dance, urban and electronic producer - both in the studio and on stage.

It might not be the most intuitive piece of music software around, but what it lacks in immediacy it makes up for in functionality, creativity and speedy workflow.