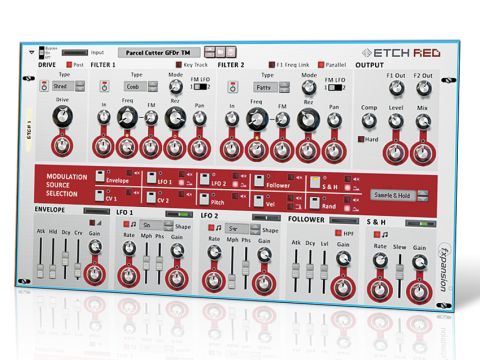 We have a feeling there are going to be quite a few essential Rack Extensions appearing in the Propellerhead shop over the coming months, but we don't think we'll see a better filter than this one any time soon.

Built on FXpansion's DCAM circuit modelling technology, Etch Red centres on a pair of filters, switchable between serial and parallel routing. There are four filter types (Japan, SVF, Fatty and Comb) and a total of 38 modes, starting with the usual high-, low- and band-pass before moving onto more esoteric variations and combinations.

The Transmod modulation system facilitates modulation of any parameter with a red depth knob underneath it via ten sources, including two separate CV inputs, an envelope, two LFOs, an envelope follower and Sample+Hold.

If you've used Etch before, this will all sound very familiar, because so far Etch Red is exactly the same. A few sacrifices have been made to re-imagine Etch within the Reason Rack, though, such as the loss of the X/Y controller (replaced by the CV inputs), fewer modulation targets (faders can'tbe assigned, basically) and no white noise source.

However, all of this is more than made up for by the rear panel sockets, which accept audio input from other devices within Reason for modulation of FM amount (at audio rate), envelope follower, S+H and pitch, and are completely independent of each other (as opposed to Etch's single sidechain input).

The cherry on top is the fact that they also enable Etch Red's TransMod sources to be aimed at anything else in the Rack. The envelope, meanwhile, can be triggered via CV gate input as well as MIDI.

Etch Red is simply a must-have for any Reason user, combining stellar sonics with slick,flexible modulation - the possibilities itopens up beyond its own slot in the Rack are immense.