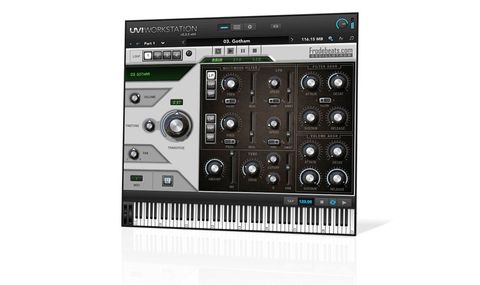 All in all, Oscillotron is a well-produced synth soundbank based on an impressive line-up of source instruments, in a surprise-free interface at a reasonable price.

Over 28,000 samples were used in the construction of this 9.1GB ROM for the free UVI Workstation (and MOTU MachFive 3), capturing the nuance and depth of numerous classic analogue synths by ARP, Roland, Korg, Sequential Circuits, Aries and more.

The interface is simple enough and spread across three windows. The first houses the main synthesis controls.

Two 12/24dB multimode resonant filters (LP, HP, BP) are onboard, arranged in series and each packing its own LFO (sine or noise) and ADSR envelope. A second envelope modulates the amp, while exciter and tube overdrive (incorporating a third filter) modules bring the fizz and heat.

The EFX screen hosts nine effects, including chorus, delay, limiter and eight-band EQ. Drawing on the effects built into UVI Workstation/ MachFive, each one presents its own set of custom controls, and all of them sound fantastic.

Being bereft of a tie function or any form of pitch modulation, the 16-channel sequencer (controlling volume, pan and swing) is aimed mainly at onboard sequencing of the 200-odd drum kit and "soundscape" patches, which place different sounds on each of a series of notes, rather than pitching them up the keyboard.

Oscillotron boasts a good number of quality patches within its curiously categorised soundbank - although there are also a few duds in there, it must be said. The drums and soundscapes are interesting and engaging, while the pads, strings, basses, keys and effects are bursting with phat analogue juice. The filters also sound great - having two of them is a real plus - and the sequencer serves its limited remit well enough.

All in all, Oscillotron is a well-produced synth soundbank based on an impressive line-up of source instruments, in a surprise-free interface at a reasonable price. However, as much as we like it, there's nothing about it that really sets it apart from its many competitors.