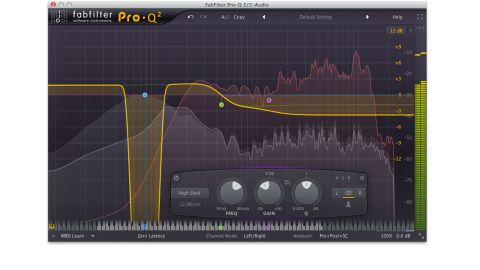 Possibly the best EQ plugin on the market. Even without Spectrum Grab, Pro-Q 2 is amazing, but with it, it's unstoppable.

We were hugely impressed with FabFilter's Pro-Q equaliser back in 2010, scoring it 9/10 and praising its sweet sound and wonderful interface.

We also admired its array of useful features such as left/right and mid/side EQ modes, although we did describe them as "not being particularly sexy".

That's certainly not a criticism we can make of the sequel, though: FabFilter have sexed-up Pro-Q for version 2 (VST/AU/RTAS/AAX) with some truly awesome new capabilities that manage to be both innovative and useful.

Many of the original features have also been improved, although on first glance you might be forgiven for thinking that little has changed. What's immediately apparent is that the new interface is larger than that of its predecessor, and now includes a peak meter on the right- hand side.

The size of the interface can be adjusted - Medium mode is the default, but a click of the Resize button reveals Small, Large and Extra-Large options - and there's even a Full Screen mode, which is a great touch, particularly for users running at lower resolutions.

Pro-Q 2's basic functionality remains unchanged from that of its forerunner: double-clicking the spectral display creates a new EQ band, with its adjustable parameters appearing in a floating panel below. These are all familiar: Frequency, Gain and Q, as well as the band's filter shape and slope.

The number of available shapes has been raised to eight with the addition of Tilt Shelf - essentially a combination of high- and low-shelf filters that can be used to quickly adjust a signal's tonal balance by boosting the highs and damping the lows, or vice-versa.

Also, while Pro-Q's filter slopes only went up to 48dB/octave, Pro-Q 2 has 72 and 96dB/octave modes available for every shape, too, and by using the steeper slopes with the bell filter, you can get the kind of useful flat-topped bell shapes that only a few EQs are currently capable of.

These additions work and sound just as you'd expect, and the new slopes will be well received by sound designers and practitioners of surgical mixing.

EQ connoisseurs will also be excited to learn of the new Natural Phase mode. This is a low-latency mode with a more analogue-like response than Pro-Q's regular Zero Latency mode, and we found that it gives clearer results when working at the extreme top-end.

With Natural Phase mode, it was possible to pick out regions in the highs above 12kHz and adjust them with a degree of finesse not possible with Zero Latency mode.

So far, it's all been pretty bread-and-butter stuff, so you're probably wondering where the sexiness mentioned earlier comes in. Well, allow us to introduce the genuinely game-changing Spectrum Grab.

The concept is simple: hover your mouse pointer over the spectrum analyser and it freezes, and the EQ handles disappear. You can now pull errant peaks or troughs into the desired position by dragging them directly.

Let's say you can see a peak in your mid-range frequencies that you want to get rid of. With Spectrum Grab, you can just grab that peak in the spectrum and drag down, instantly creating the required EQ band, which can be tweaked later. It really is an astoundingly clever and well-executed feature.

Another excellent new addition is the Piano Roll display: activate this and a keyboard graphic appears at the bottom of the spectral analyser, complete with colour-coded dots marking the pitches of all the EQ filters.

These dots can be dragged up and down the keyboard, snapping to notes on the way, making it easy to target your cuts and boosts at specific pitches. Again, simple but clever stuff.

The last of Pro-Q 2's big new features is EQ Match, which cleverly imbues one signal with the tonal characteristics of another. There are several other convenient but comparatively minor enhancements thrown in, too, including optional Q/Gain interaction, Auto-Gain and Gain-Scale functions, plus CPU and memory optimisations. All solid, sensible stuff that's likely to speed up your workflow.

FabFilter Pro-Q 2 is practically impossible to fault, being absolutely stunning in terms of usability, functionality and sound. The fantastic enhancements over the original version make the discounted upgrade a no-brainer for existing users (the discount starts at 50% but can be up to 65% depending on how many FabFilter products you already own), while the reasonable pricetag makes it hard to resist for newcomers. Honestly, our only criticism is that you can only ever view the parameters of one band at a time - slightly inconvenient, but not exactly heartbreaking.

Even if you're happy with your current EQ solution, we fervently recommend giving the demo version a try to see what you're missing. Audio processing tools just don't get better than this.