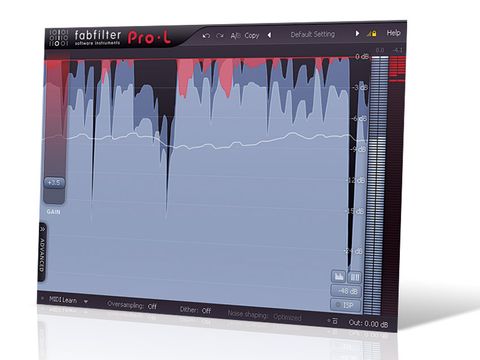 A slick, visual twist on brickwall limiting, with famously fantastic FabFilter sound quality to back it up.

Pro-L is a multipurpose limiter for mixing and mastering applications, with a novel graphical interface.

Initially, it looks similar to its elder brother Pro-C, displaying input and output waveforms in clear view with a gain reduction graph scrolling alongside in real-time. As with Pro-C, we find this very helpful.

The most fundamental control, the Gain fader, is to the left, with Level meters on the right and other options at the bottom. Advanced controls are tucked away until you need them - and often you won't.

It's clear that FabFilter are serious about sonics, as they've even included an inter-sample peak (ISP) detection option for the metering. This predicts the peak level of the waveform at the digital-to-analogue conversion stage.

With ISP engaged, we found that many sources peak significantly higher than the digital maximum (at least in our tests, all at 44.1kHz). By adjusting the settings to avoid excessive ISPs, you can reduce the risk of possible converter clipping.

To alleviate the kind of digital aliasing artifacts that can arise from fast limiting, Pro-L has optional 2x and 4x oversampling. This causes an additional CPU overhead, but you can really hear the difference, and it can help to allay ISP issues too.

When holding down the Alt key, input gain adjustments are compensated by the output gain. This is extremely handy for listening to the effects of the limiter without being seduced by an increase in peak level. It's also good for mixing situations where you just want to shave off a peak or two without disrupting mix levels.

When you're ready to go deeper, there's the Advanced tab. For a start, there are four limiting 'styles': Transparent, Punchy, Dynamic and Allround. We're not sure that they always perform strictly as labelled, but there's enough choice to confidently tackle most mixing issues, as well as adapt to mastering situations.

All are program dependent, that is, the response adapts to the signal, similar to the 'auto release' option in some other limiters.

The lookahead, attack and release ranges are all very flexible (5ms maximum for lookahead, 10s maximum for attack and release). Even more impressive is the Channel Linking section, which enables you to adjust the stereo link amount for both Transients and Release settings. Aside from its obvious practical uses, it can also turn Pro-L into a stereo widener (depending on the source material, of course).

As for sound quality, Pro-L is everything you could hope for in a limiter. It's transparent when you want it to be, and it goes as loud as any other limiter we've used, but with the right settings, you can make it deliberately kick and pump, too.

This is a very special dynamics processor that's suitable for just about every kind of music. It also brings something new to the world of limiting via its visual display.

Now listen to our audio demos for an example of what Pro-L can do: